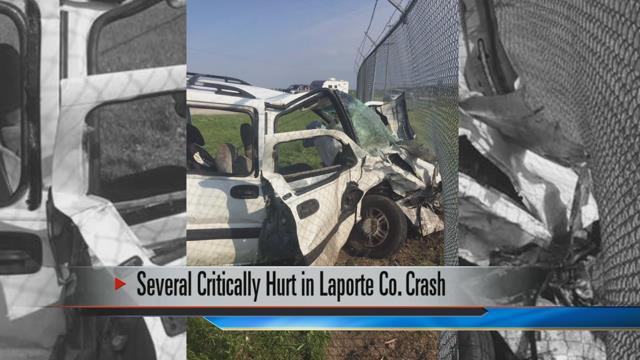 The La Porte County Sheriff’s office posted to their Facebook page Sunday evening about the accident that happened around 4:30 p.m. (CST).

The crash happened at the intersection of U.S. 421 and U.S. 6 just south of Westville, Indiana.

When deputies arrived, they found two vehicles involved and multiple victims with serious injuries including one passenger that had been ejected from a vehicle.

Investigators say a white Chevrolet mini-van was traveling west on US 6 and pulled in front of a southbound vehicle that was described as a brown Buick SUV.

Traffic on 421 does not have to stop, but westbound traffic on U.S. 6 has a stop sign.

There were four people in the Chevrolet including an adult male that was ejected from the vehicle and a 6-year-old that was flown from the scene after the accident.

Five people were in the Buick when the accident happened.

Numerous emergency responders including a medical helicopter responded to the scene along with several police officers.

US 421 was closed at US 6 while La Porte County EMS responded with four ambulances for injuries.

The six-year-old child was flown from the scene to the University of Illinois in Chicago.

The adult male who was ejected from a vehicle was rushed to Porter Hospital and later flown to Loyola Hospital in Chicago.

The seven other patients were taken to La Porte Hospital and St. Anthony's Hospital in Michigan City.

Police say all victims of the crash were listed as either serious or critically injured.

The intersection was closed until approximately 6:00 PM (CST)