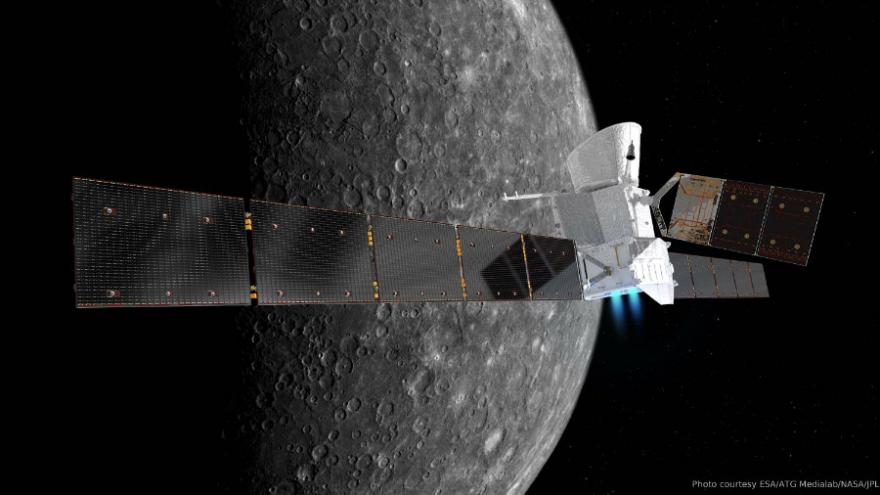 (CNN) -- A seven-year, eight-million-kilometer voyage expected to shed light on the mysteries of Mercury, the solar system's least-understood planet, is nearly ready for takeoff.

The ambitious BepiColombo spacecraft will be launched from a European space port in French Guiana early Saturday.

It will begin the most comprehensive journey ever made to the closest planet to the sun, which has puzzled scientists for centuries.

When BepiColombo arrives in December 2025, it will place two probes in orbit around the smallest planet in the solar system.

They will tour Mercury for a year before feeding their findings back to earth.

Little is known about the history, surface or atmosphere of Mercury, which is notoriously difficult to explore because of its proximity to the sun.

Only two previous missions, both carried out by NASA, have reached the planet before.

BepiColombo, a $1.8 billion joint mission between the European and Japanese space agencies, will have to fire xenon gas constantly from two of four specially designed engines in order to permanently brake against the sun's enormous gravitational pull.

A heat shield and titanium insulation have also been applied to the spacecraft to protect it from intense heat of up to 350 degrees Celsius.

The European Space Agency (ESA) first proposed a mission to explore Mercury in 1993. It has built one of the two orbiters, with the Japan Aerospace Exploration Agency (JAXA) providing the other.

BepiColombo, named after renowned Italian scientist Giuseppe "Bepi" Colombo, is taking a convoluted route to Mercury, flying past the Earth once, Venus twice and Mercury six times before releasing its orbiters to study the latter planet in more detail.

Its creators are hoping those final orbits around Mercury will help solve some of the many questions about the perplexing planet.

"Mercury is extremely hot and it's an extremely difficult place to get to because of the gravity of the sun," Justin Byrne, head of science at Airbus, which led the project to build the spacecraft, told the UK's Press Association.

The planet is even difficult to observe from Earth, due to the brightness of the sun directly behind it.

Its distance from Earth also makes it difficult to reach -- more energy is required to allow BepiColombo to "fall" toward the planet than is needed when sending missions to Pluto.

NASA's Mariner 10 took the first high-quality images of Mercury during its three flypasts in 1974 and 1975. Messenger then spent four years at Mercury from 2008.

The planet has very little atmosphere, and its solid and rocky surface is littered with craters from meteor impacts.

Scientists will be eager to explore previously discovered evidence of water ice on the planet.

But it's very unlikely that life will be found -- temperatures on Mercury range from highs of 800 degrees Fahrenheit to lows of minus 290 degrees, according to NASA, making it almost impossible that the planet could support life.

It is the fastest planet in the solar system, orbiting the sun in just 88 days -- meaning that one Earth year is equivalent to approximately four Mercury years.