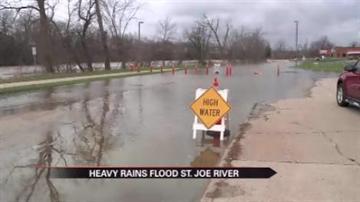 In South Bend, the St. Joseph River is spilling into the street on Northside Boulevard.

At Leeper Park, just north of downtown, the river is already creeping inland one inch at a time, but it looks like it won't get too far.

At the Michigan street bridge, the water is already over the base of the bridge.

At Howard Park, the river has reclaimed a portion of the park.

With the rain pretty much over, the National Weather Service has revised its estimates for how high the St Joseph River will get.

Thursday they thought it would get up to 7 feet but Friday afternoon that number had dropped.

Several roads in Kosciusko County are closed because of flooding.