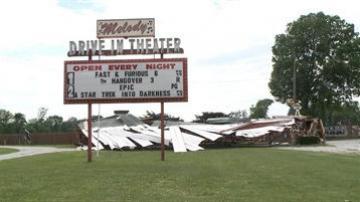 BASS LAKE, Ind. -- Most of Michiana managed to escape Friday night's wild weather, but for one of Michiana's oldest movie theaters, that wasn't the case. Folks at the Melody Drive-In Theater in Bass Lake saw an entire screen topple over due to strong winds.

Metal is no match for mother nature.

It's something movie-goers in Bass Lake know first hand. Friday, they caught an unxpected encore to their double feature.

The credits were rolling when the wind picked up and blew an entire projection screen over. Now, owners are picking up the pieces.

"It does put a little damper as far as some movies we're going to be able to pick up," Fred Heise Jr., co-owner of Melody Drive-In Theater, said. "But it could be worse."

When the speakers started lifting up that night, he knew he was in for it.

"It sounded like twisted metal, almost like a couple of cars crashing into one another. It was loud."

On Saturday, parts of a nearby fence and tree limbs lay on the ground. The good news is, the theater still has another projection screen, so people wanting to catch a flick outdoors won't have to wait too much longer.

"This is a family run business. We do our best to try and make the community happy. It's kind of an icon."

An icon, they plan on getting back up and running as soon as next week. Heise said it's unfortunate what happened, but he's not one to dwell on things he can't change.

"Sometimes, you look at it, and you're like 'why me?', but you know what, you get past that and you look at the positve note to it. The positive is, we still have another screen. No one got hurt, and we're all still breathing."