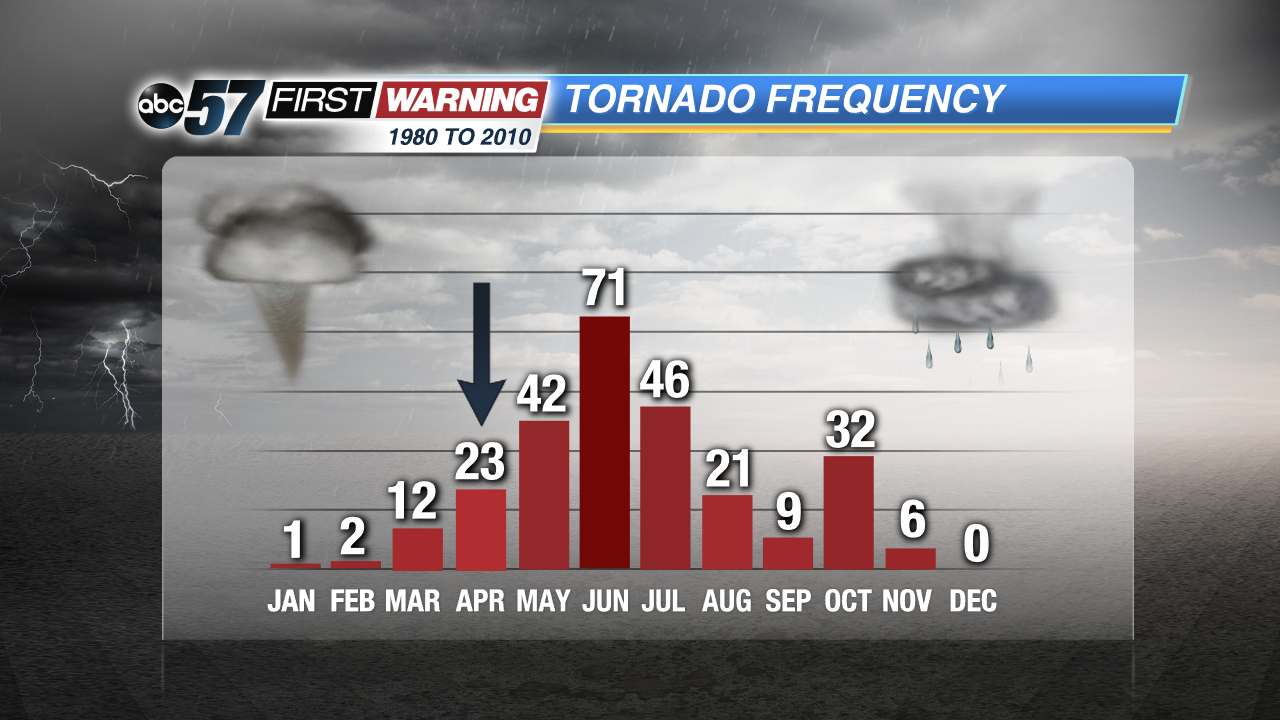 Michiana tornadoes from 1980-2010
With April set to get underway in a couple of days, one may be wondering about an uptick in thunderstorms and tornadoes here in Michiana. The year has been very quiet in those departments thus far, but there is a noticeable jump in severe weather frequency from March to April. An even more significant jump exists between April and May. Between 1980 and 2010 -- the most recent climatological period -- Michiana saw 12 tornadoes in March. That number essentially doubled to 23 for April and doubled again between April and May. Meteorologists and climatologists use 30-year periods like the one above to achieve rough averages and norms for any given location. Therefore, it can be insinuated that, in any given 30-year period, Michiana's tornado numbers would resemble the ones shown in the chart. 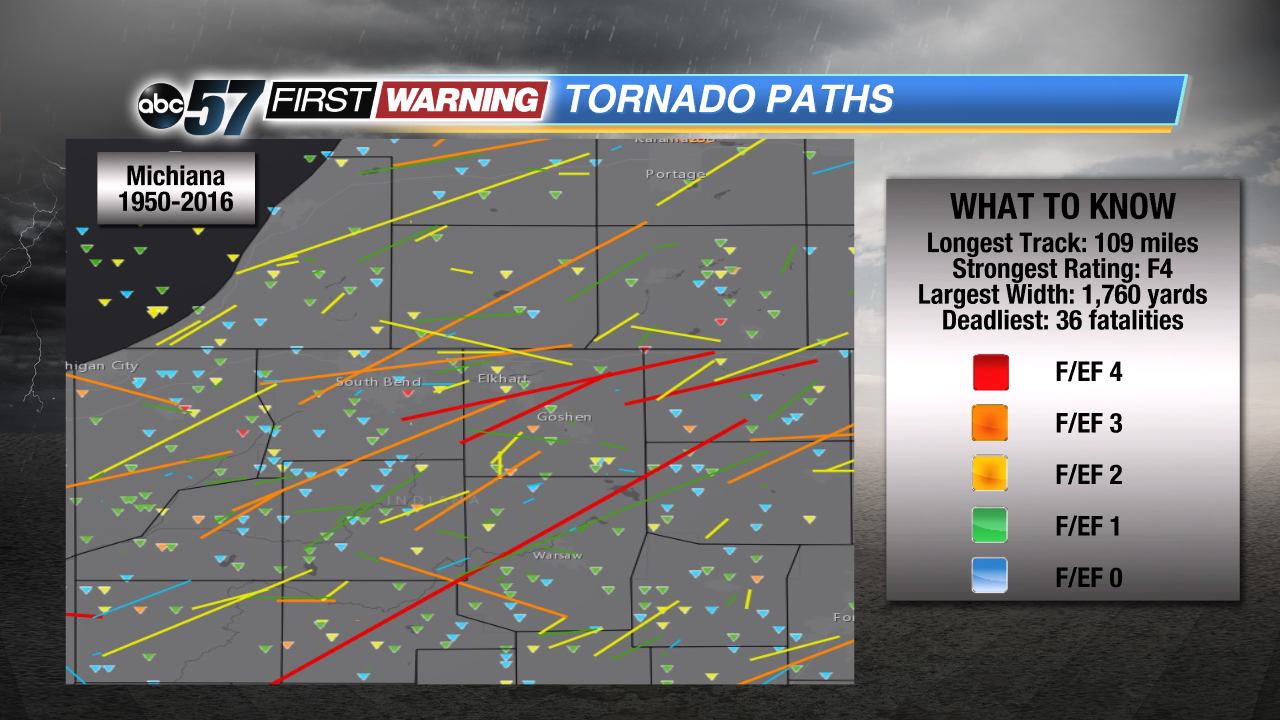 All tornado touchdowns and paths from 1950 to 2016. NOAA SPC
On a per-year basis, there is just shy of one tornado every April in Michiana, on average. That jumps to nearly 1.5 tornadoes every May and more than two tornadoes every June. Again, these numbers are for all 12 Michiana counties. It's important to remember that these numbers are averages calculated by the 1980-2010 data. Any year has the potential to feature more or less tornadoes than those averages. For example, the 23 tornadoes to strike Michiana in the month of April between 1980 and 2010 could have all occurred in 1995. Or, there could have been 15 tornadoes in April of 1995 and 8 tornadoes in April of 2011. On average, though, the area sees just under one tornado per April. 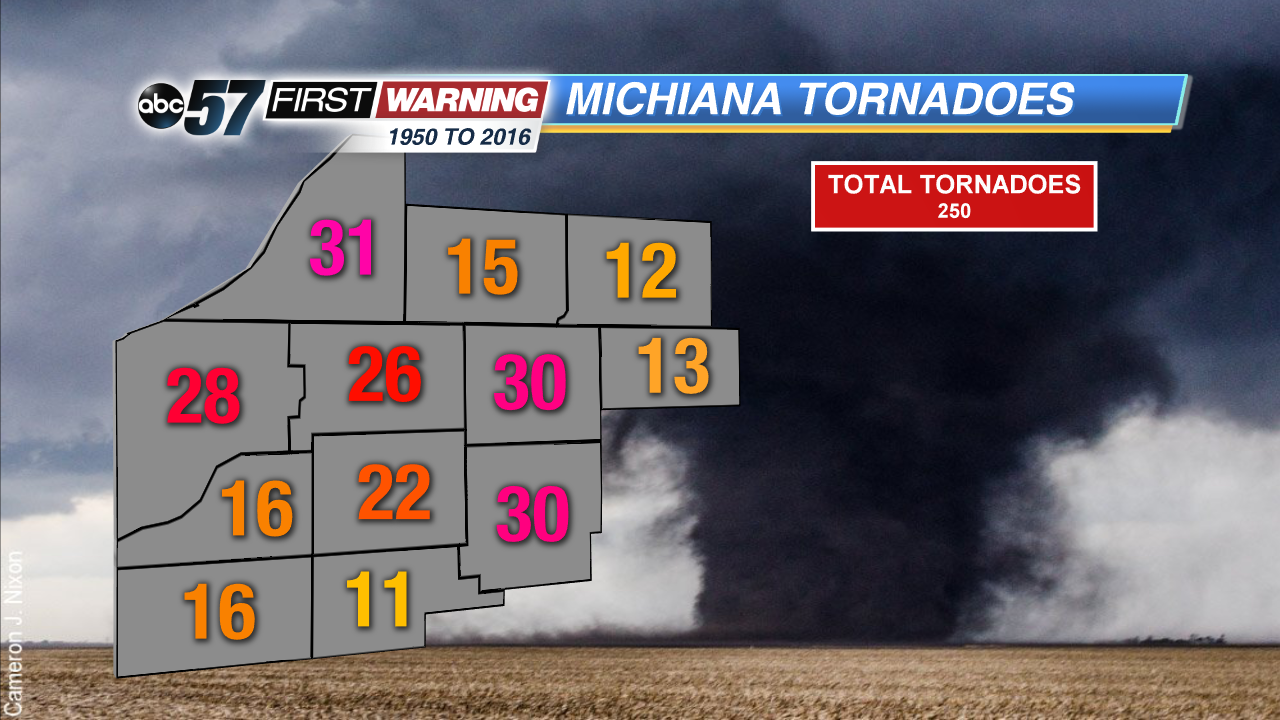 Total tornadoes per county between 1950 and 2016.
Regarding tornado strength, most of what Michiana sees are short-lived, weak tornadoes that rate either EF0 or EF1 on the Enhanced Fujita Scale. However, there have been a handful of stronger, longer-lived tornadoes as indicated by the solid lines on the "Tornado Paths" map shown above. A few of those were rated F3 or F4, and stayed on the ground for several miles. Michiana's longest tracked tornado had a path length of about 109 miles. It touched down northwest of Lafayette and stayed on the ground into LaGrange County. At its peak, it was a mile wide. That tornado isn't the deadliest Michiana tornado, though. That belongs to the 1965 F4 tornado that moved from south of Mishawaka to south of Elkhart before dissipating northeast of Shipshewana. A total of 36 people lost their lives in that storm with an additional 321 injuries. 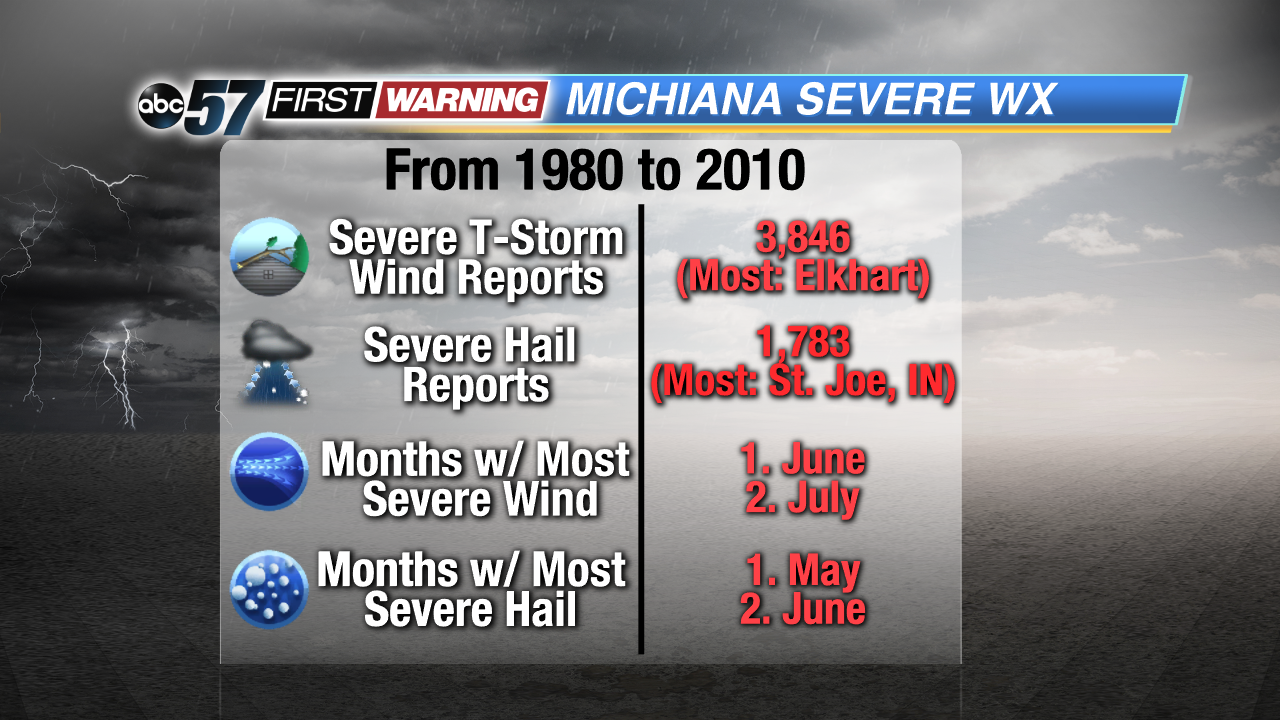 Despite most of the longer-tracked and stronger tornadoes affecting northern Indiana, Berrien County has seen the most overall tornadoes since 1950 at 31. Elkhart, Kosciusko, La Porte, and St. Joseph (IN) Counties aren't far behind. There is, however, a big drop in total tornadoes as you travel to Starke, Pulaski, Fulton, Cass, St. Joseph (MI), and LaGrange Counties. One possible reason is less people living in those counties to report potential tornado sightings and/or damage. Another potential reason for the big drop-off is the sheer size of the counties. Those with higher tornado totals are larger in area than those with lower tornado counts, on average.

It's not just tornadoes that we see spike during the late spring and early summer months, though. Severe thunderstorms with large hail and damaging winds are more common during this period as well. In fact, large hail and damaging winds are much more common than tornadoes in northern Indiana and southwest Lower Michigan. There were nearly 4,000 reports of severe wind in Michiana between 1980 and 2010 and nearly 2,000 severe hail reports during that same period. On average, May is the month in which the area sees the most reports of severe hail. For severe wind reports, that month is June. But, just like tornadoes, these two forms of dangerous weather see significant spikes in how often they occur between March and April and again from April to May.