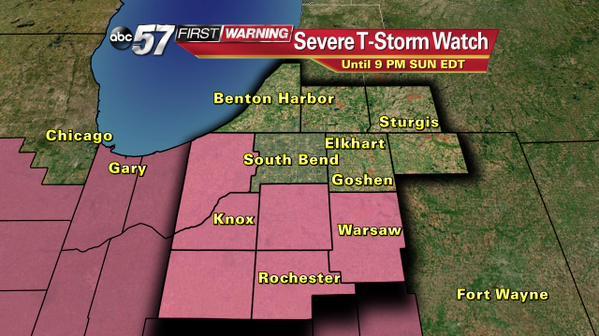 5 PM Sunday Update: A Severe T'Storm Watch has been put in place until 9 PM EDT for our western & southern counties including LaPorte, Starke, Marshall, Pulaski, Fulton, & Kosciusko County.  At this time, the radar shows a line of strong thunderstorms that have had a history of producing hail, frequent lightning, heavy downpours, and gusty winds.  They have set up just to our west, but as they move into Michiana, they are weakening considering we saw the line of showers earlier today.  These storms do not have enough energy to fuel them.  Therefore, they start to stall as they move into our western most counties, which means the greatest threat now becomes flooding.  As always, we will update this article and social media with the latest.

11 AM Sunday Update: A line of showers will move through midday. This is NOT the severe threat, but could impact our storm risk later today. The longer it's rainy/cloudy the less our severe threat will be this evening. Models are consistent in showing a break by mid afternoon and a second line to storms moving through around 7 PM, this is the timing of the severe threat. Be weather aware, and storm ready by 5 PM.

10 PM Saturday Update: After a sunny Saturday, a stormy Sunday is on the horizon.  With timing of storms getting pushed back with every model run, the potential for severe storms increases.  The later the storms in the afternoon and evening, with sunshine peeking through the clouds during the day, this enhances that threat, which is why the severe weather threat for Sunday is three out of five for much of Michiana.

At least Sunday morning remains calm, but that changes by the afternoon.  Fig. 2 - Fig. 5 show the latest timing of the line of thunderstorms that have the potential to become severe.  According to the National Weather Service, a severe thunderstorm is categorized by large hail (at least 3/4 inches) and wind speeds of at least 58 mph.  Hail is possible in certain cells, but the main concern is for heavy downpours causing localized flooding as well as damaging straight line winds.

You need to remain weather aware and have a plan if severe weather strikes your neighborhood.  Stay with the ABC 57 First Warning Neighborhood Weather Team for the latest updates on the air, online, Facebook, and Twitter.