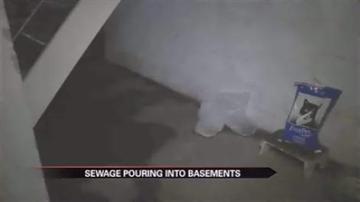 ELKHART, Ind.--  Earlier this week, repairmen were working on the sewers at the top of Hudson street. Right after- homeowners started noticing a stench coming from their basements. Many walked downstairs to find at least four inches of standing water and raw sewage

Victoria Mathias says she regrets moving into her home this past January.

"It's Memorial Day weekend and we don't have money, but yet we have to stay in that house and smell all of that," said Mathias.

Her home on Hudson Street smells of sewage ever since water started pouring into her basement early Monday morning.

"I checked everything before I walked around and tried to figure out what's been going on and I was told it's not the first time it has happened," said Mathias.

So she went to the city for answers, but was told to hire a cleaner.

Her only option now is to wait for insurance claims to process.

"She said that everything has to go through the process. It has to be proven that it is the city of Elkhart's problem for the sewage."

But the neighbor across the street says the cause of the problem is obvious.

"I knew it was from something they had done up the street cause they had just been working on the lift station about a week prior to that," said Scott Lee.

Now Lee is stuck cleaning his basement this weekend. He sucked up four inches of standing water and is still waiting for the pieces of sewage to dry.

"I had to go to work and knew it was going to be standing there all day long. Most of it drained out but then I'm left with the raw sewage left on the floor," said Lee.

The houses sit along the river, but homeowners say this isn't just normal water damage.

"David Henke's owned these properties for I believe about 30 years and he told me he had never seen any water come up through the basements," said Lee.

With the holiday weekend, no one from the city was available for comment. Homeowners were told once claims are processed they'll learn whether or not the money to clean up will come from the city's wallet or their own.