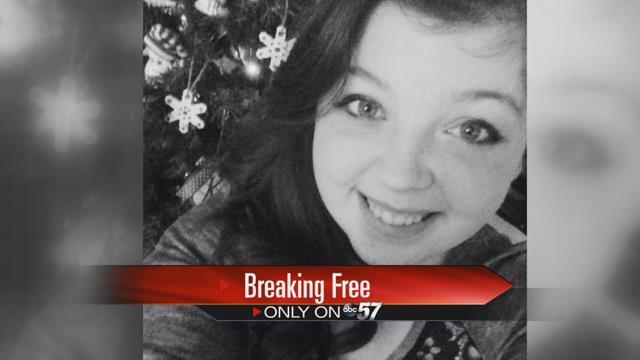 A local artist is sharing the story of a sex trafficking victim in hopes of bringing more light to the dark industry.

For her protection, we will call the victim "Kaitlyn" in this story.

She says she was trafficked by a worker at her daycare in Midland, Michigan and she now shares her story across the world in hopes of bringing more victims to freedom.

Kaitlyn believes she was first sold for a sexual act when she was barely old enough to walk.

Kaitlyn said, “I was freed when I was 9-years-old from trafficking, and it actually happened at the daycare I went to. So I’m free now and I’m recovering very well so I’ve just decided that because of everything I’ve been through, I’m going to help other people.”

Now that she is free, Kaitlyn is using the darkest time of her life to help others see a bright future.

Kaitlyn said, “In the bible it says that I should use my freedom to free others. So that’s ultimately what I’m doing here.”

Kaitlyn was interviewed via Skype because she is working in Thailand with an initiative to free sex slaves.

An artist who is part of the Southwest Michigan Human Sex Trafficking Task Force heard Kaitlyn's story, and decided to share it through a different medium.

Kaitlyn said, “In working with my young friend, she’s been doing a lot, going and sharing her story, and encouraging others and actually she’s traveling the world making a difference in other young women.”

In Jacqueline Baeworld's exhibit, she is showing Kaitlyn's emotional transformation.

Kaitlyn said, "To see those embodied in art is really powerful."

Baeworld's art is created on old books and made into something beautiful.

Baeworld said, '“Once you get below the surface and realize hey there’s something I can do about this, it’s empowering, and we can all come together.”

The exhibit has been shown at the Box Factory in St. Joseph as well as the Niles library.

Baeworld said, "She no longer has the stripes outfit of a prisoner, she’s been set free.”

Baeworld said that she is taking Kaitlyn's story and the exhibit to Art Prize in Grand Rapids.