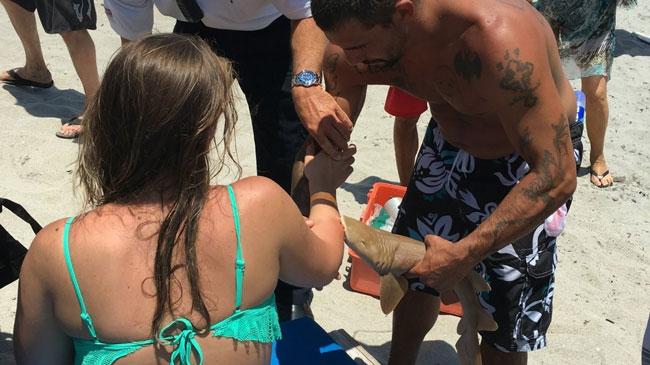 (CNN) -- This is the story of a shark who became quite attached -- to a woman's arm.

It just wouldn't let go. Not when she ran out of the water. Not when a beachgoer rushed to help her and killed it. Not when the woman was loaded on a stretcher with a splint board supporting her arm.

The incident happened at a Boca Raton beach on Sunday.

The good news is that the 23-year-old woman was taken to a hospital where doctors removed the shark and she's fine. And it was a nurse shark -- not a menacing Great White.

The bad news is a SHARK CHOMPED DOWN ON HER RIGHT FOREARM!

Nurse sharks are common in offshore Florida waters and can grow up to 14 feet in length.

So, it's a good thing this one was just 2 feet long.

"It's a shark that's been in our park for sometime," Capt. Clint Tracy of the Boca Raton Fire and Rescue told CNN affiliate WPEC. " And although we have compassion for the victim we're also sad that the shark is not going to be there anymore."