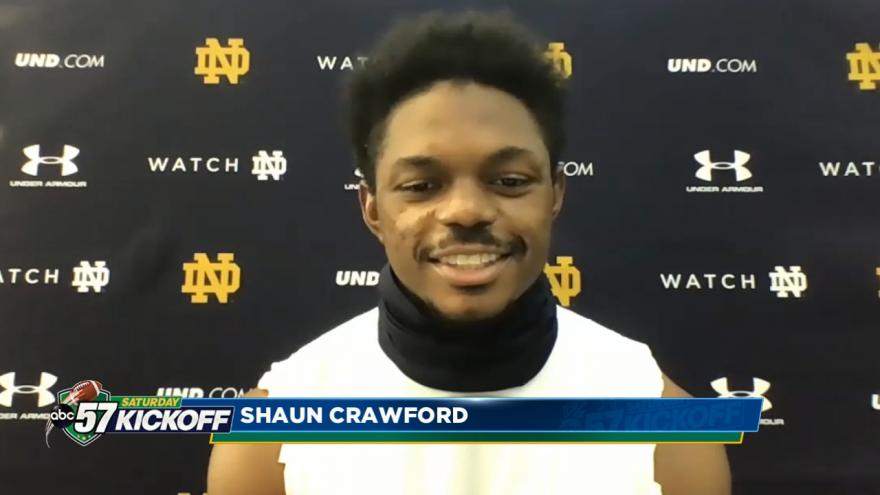 Shaun Crawford's stats don't really jump out at you, but his story is more than just numbers. Having played in 27 games in his six seasons with the Irish, he makes the most of every opportunity. That mentality has paid off for the Notre Dame captain.

On October 10, 2020, late in the fourth quarter against Florida State, in a college career full of defining injuries Crawford flipped the script and came away with a career defining interception instead.

“Going back to corner was a little frustrating. But I took that has a challenge,” Crawford said.

In 2015, an ACL tear ended his freshman campaign. The next year he missed 10 games because of a torn Achilles. Another torn ACL in 2018 cost him that season.

Bouncing back from these setbacks taught him to appreciate both the positive and negatives about being sidelined.

Crawford opened up to Irish soccer player Bailey Cartwright in an episode of Stronger Scars, a podcast she set up to connect athletes who have faced major injuries playing sports.

“He was just so appreciative that someone cared to talk to him about his injury,” said Cartwright.

Crawford missed two more games in 2019 after dislocating his elbow in a game against Virginia.

He vowed to come back for another season and it has paid off even as he moved positions – to safety.

“Shaun is one of the best players on his team. He's played more snaps than everybody in the DB room combined. He's seen a lot of football. He knows what he's doing. You never really have to worry about him doing his job,” Kyle Hamilton said.

The Irish were shorthanded at corner against Florida State so when Head Coach Brian Kelly asked the captain to go back to cornerback position mid-week he didn’t hesitate.

“He moved over to the cornerback position and bailed us out in a very, very difficult time. Playing a position he hadn’t been repping at all because he had been playing those safety reps,” Coach Kelly said.

Overcoming adversity for Crawford is nothing new - in fact he thrives on it.

He came back from what could’ve been career-ending injuries and turned them into career defining plays.

“When I was out there I told myself I would play fast and try to make some plays and just to be as aggressive as I can to help the team win,” Crawford said.

With the new rules because of COVID-19 all players are granted another year of eligibility regardless of how many games played in 2020.

Will we see Crawford come back for year seven?!