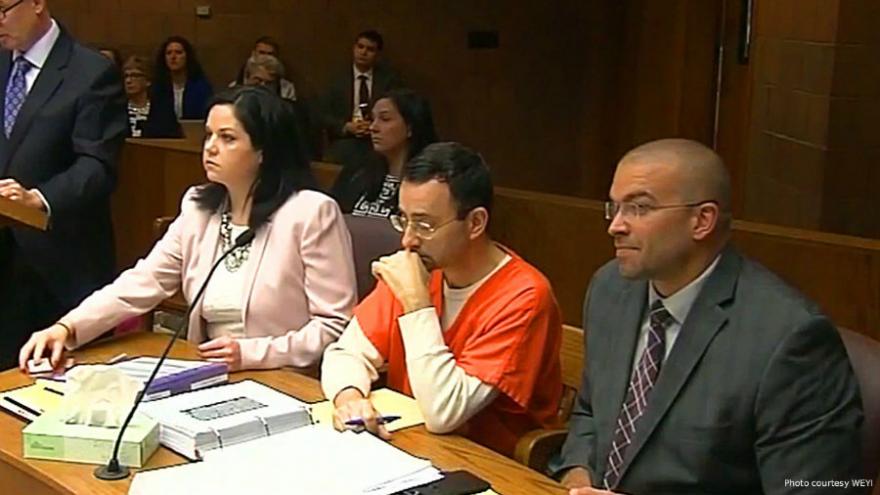 After listening to his daughters describe the abuse they suffered, Randall Margraves tried to take matters into his own hands.

He lunged towards Nassar in court and the bailiffs sprung into action.

Federspiel has two daughters and admits he too would have had trouble containing himself. He said the bailiffs who intervened did the right thing.

"We have to make sure that the rule of law is always followed and that we don't ever allow anyone to exert any type of street justice," Federspiel said.

The sheriff and Lt. Miguel Gomez said what those bailiffs did was textbook procedure.

"They did an excellent job. If you look, the first deputy grabbed him around the chin, right? And then he turned his head and then when he was put on the ground they controlled the head and then he couldn't move anymore," Gomez said.

Gomez said court bailiffs are not only trained on how to stop an attack, but watch for warning signs such as facial cues.

The sheriff said when emotions run high, those deputies have to be on an even higher alert.

"They can only respond to actions. So you have to wait until he makes his first move and the minute he makes a move physically to do something that's when we have to intervene and that's what they did," Federspiel said.

The father was later brought back into the courtroom where he apologized for his attack.

"You have to remember one of the first duties of a father is to protect his daughters. So it's going to be emotional and it should be emotional," said Mark Gaertner, assistant Saginaw County prosecutor.

The father spent some time locked up on Friday after his outburst, but no charges were filed against him. Gaertner believes that was the right call in this situation.

"To him, his daughters are probably worth a lot more than a prison sentence for Dr. Nassar. You can understand it. It's human nature. It's human behavior," Gaertner said.