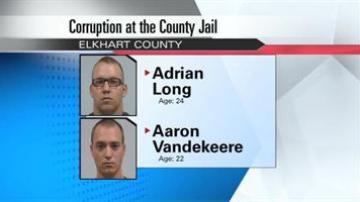 ELKHART COUNTY, Ind. -- The Elkhart County Sheriff spoke out about the arrests of two of his former corrections officers at a press conference Wednesday morning.

Sheriff Brad Rogers said he won't tolerate misconduct in his department and said he and others will continue to push for strong character among their officers.

Adrian Long was charged with sexual misconduct by service provider with detainee for allegedly having sex with a female inmate. Long resigned from his position.

We asked if the department would change any policies as a result of the arrests of the former corrections officers.

"Well, as I indicated, we will always continue to keep the core values as central as to our focus in the selection process - and being diligent and policing ourselves," said Rogers.

Rogers says his department won't tolerate misconduct by those who wear the uniform.

"It happens from time to time, because we're dealing with human beings," said Rogers.

We wanted to find out if there have been other issues at the jail so we sifted through affidavits for details.

One concern was that inmates have "their own means to charge cell phones." The other concern is that the jail has at least one spot, "known to be a blind spot" in the surveillance system.

We asked the sheriff if he plans to do anything more, he referred us to the prosecutor's office.

"Once again, I know it's going to disappoint you, but I'm going to refer all my comments to the Elkhart County Prosecutor's Office," said Rogers.

The sheriff did comment on internal meetings with those officers before, during and after the arrests and says he'll continue to have those discussions on proper procedure and policy looking forward.

The sheriff said they learned of the alleged illegal activity after an inmate approached investigators about incoming contraband.