Shootings down in South Bend this summer 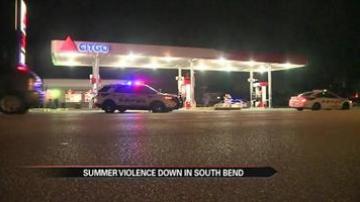 SOUTH BEND, Ind. -- South Bend Police are searching for suspects in three separate shootings that happened over the weekend. Even though there were three separate incidents, shootings are down this summer.

In the shooting at the Citgo on Lincolnway West, two people were shot and taken the hospital around 11:30 p.m. Sunday.

Saturday evening around 8:30 p.m., a man was shot in the leg during a drive-by shooting in the 2500 block of Ford Street.

A drive-by also happened when someone fired multiple shots at a home in the 600 block of South Bendix Street.

Residents say there are still too many shootings.

"I just push the ice cream cart all over. I'm everywhere. I'm just trying to get money," said Aallyn.

Aallyn moved to South Bend from the south side of Chicago almost 2 years ago.

"I'm thinking I'm about to get away from all the mess going on but I move out here and its really like the same stuff happening out here," said Aallyn.

Aallyn says two drive-bys and a double shooting in 72 hours is overwhelming and hits close to home.

"I'm tired man. I wish it was a little peace man. It ain't fun for someone to lose somebody. I've lost a lot of people in my life," said Aallyn.

South Bend Police are heading an operation that focuses on putting a stop to group violence that includes shootings and possible gang activity.

Aallyn says the key to staying out of trouble, is finding something to be passionate about.

"Everyday I'm working hard to try to keep some money in my pocket and take care of my kids," said Aallyn.