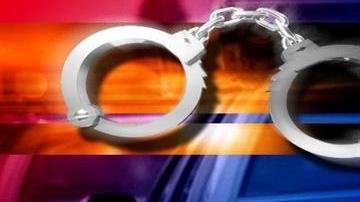 ELKHART, Ind. -- A traffic stop in Elkhart led to a short chase and ended with three people in jail and a car overturned.

Elkhart County Sheriff's Deputies attempted to pull over a vehicle at about 2:17 a.m. near the intersection of CR 9 and CR 20.

The driver refused to stop and led police on a roughly two mile chase ending up with the vehicle overturned and passengers stuck inside after reaching a dead end on Morehouse Ave south of Main Street in Elkhart.

One passenger had to be cut out of the car.  The 18-year-old female passenger was taken to the hospital to be treated for her injuries.  She was later released.

The driver of the vehicle, Christian Serrato, age 20, ran from the scene, but was caught.  He was taken to the hospital to be treated for a cut to the head after the accident, was later released and arrested.

Two other passengers in the vehicle were arrested for public intoxication and are currently housed at the Elkhart County Correctional Facility.