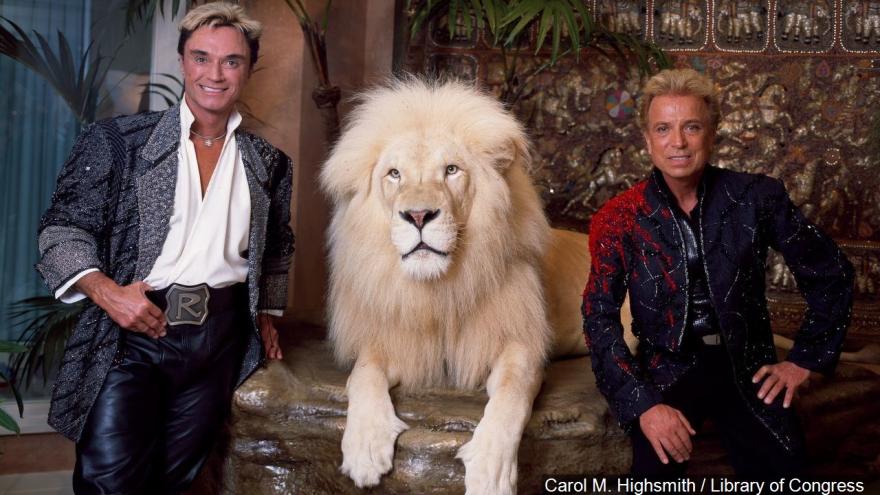 (CNN) -- Siegfried Fischbacher, an illusionist known for working with exotic cats as one half of Siegfried & Roy, has died from pancreatic cancer, according to his publicist Dave Kirvin.

Fischbacher's longtime professional partner and friend, Roy Horn, died in May from complications caused by Covid-19 at the age of 75.

The pair rose from war-torn Germany to become stars of stage, film and television by combining their spectacular illusions with rare animals.

For Fischbacher, it all began with a child's curiosity.

"My eye caught something in the window; it was a book on magic," he said in his bio on the their site. "I knew I had to have it. I can't explain, even now, why that was. All that stood in the way was five marks -- for me a fortune, a fortune for any little boy in Germany in 1947."

As he walked away, he said, he found five marks on the sidewalk and immediately returned to purchase the book.

He met Horn in 1957 aboard the TS Bremen cruise ship, where Siegfried was working as a steward and entertainer. He enlisted Horn, the captain's bellboy, to assist during his nightly magic show.

According to a press release about Fischbacher, Roy asked a question after the show which would change their lives.

"Siegfried, disappearing rabbits is ordinary, but can you make a cheetah disappear?" Horn said.

After a pause to consider, Fischbacher replied, "In magic, anything is possible."

Unbeknown to him -- and the ship's captain -- Horn had smuggled his pet cheetah aboard the cruise to join the act.

What followed was a five-decade partnership.

"We did what we did out of love, not for success or money," Fischbacher once said. "We had a deep respect for each other. We literally raised each other: I created Roy and Roy created Siegfried."

They began in Las Vegas in 1967 as a featured act in notable Las Vegas revues "Follies Bergère," "Hallelujah Hollywood" and "Lido de Paris" before becoming headliners in "Beyond Belief" at the New Frontier in 1981.

In 1990, the duo became a Las Vegas "destination" when their precedent-setting, 14-year run at The Mirage began.

The $30 million production -- an unheard of amount at the time -- regularly sold out the then-largest theater in Las Vegas history.

Their revue ended in 2003 after Horn's spine was severed in an incident on stage with a white tiger named Mantecore.

Fischbacher paid tribute to his longtime friend and collaborator after his death.

"Roy was a fighter his whole life including during these final days," he said in a statement. "I give my heartfelt appreciation to the team of doctors, nurses and staff at Mountain View Hospital who worked heroically against this insidious virus that ultimately took Roy's life."

Funeral services will be private with plans for a public memorial for Fischbacher to be held in the future.

In lieu of flowers, donations can be made to the Cleveland Clinic Lou Ruvo Center for Brain Health.