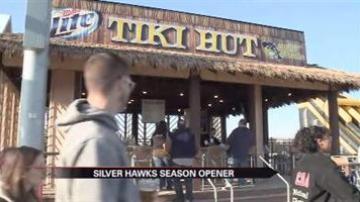 SOUTH BEND, Ind. — It is time to play ball. The South Bend Silverhawks took on the Bowling Green Hot Rods in the season opener.

The game started off close before the Hot Rods pulled away. The final score was 8-2.

Over the off-season the stadium received some upgrades.

A new HD video board has been added and a fog horn similar to the one used at Yankee Stadium.

"It's pretty amazing, I started coming here since 2008 and to just see the improvements every year," said fan Carrie King. "There's something new this year. There's the beer garden we just checked out and the fun zone from last year and it's just a lot more exciting. And definitely the attendance is going to be better too."