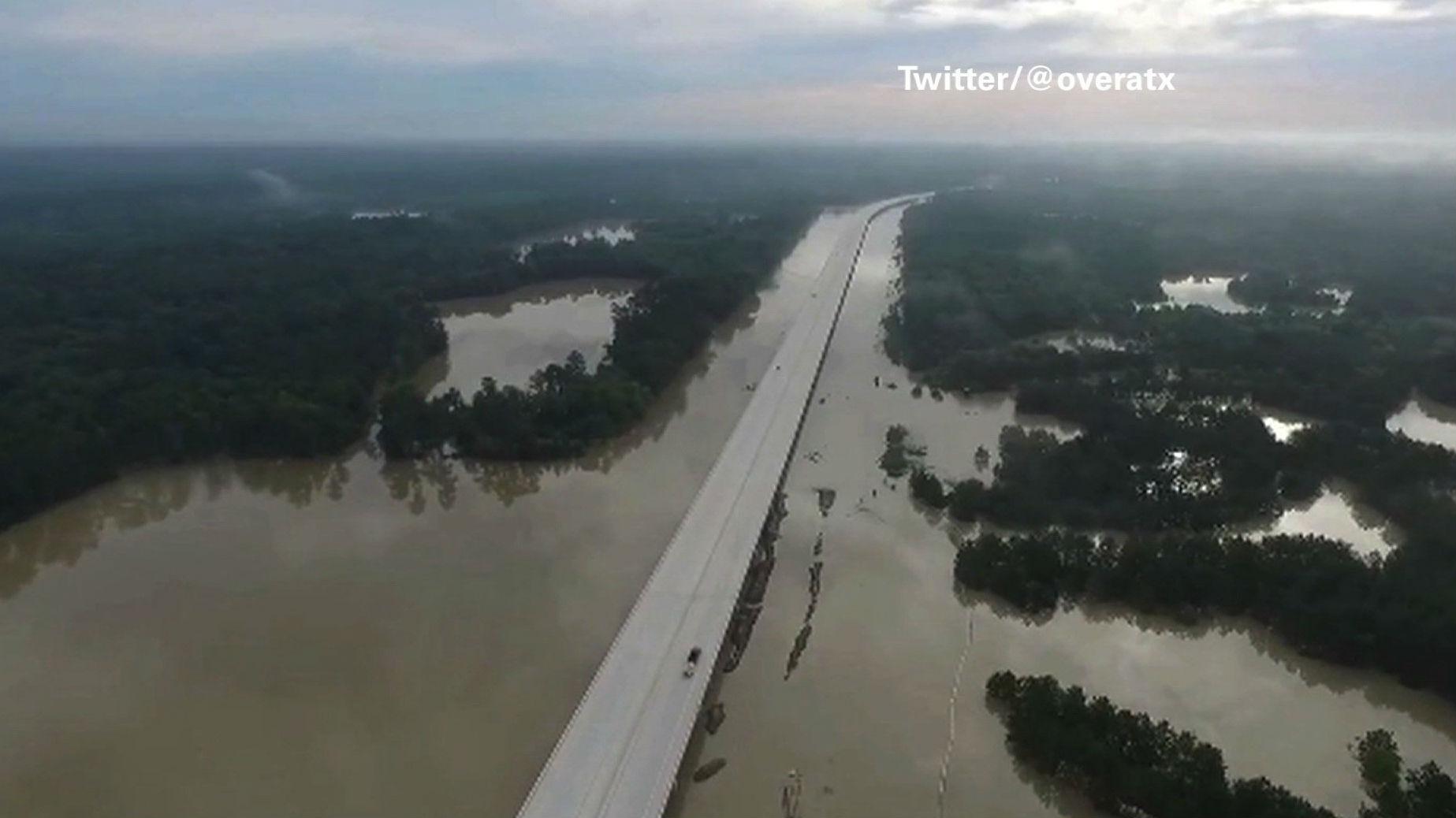 (CNN) -- Six people have died in flood-related incidents in southeast Texas after the region was inundated with rain, authorities said.

Four were killed in Washington County, about 75 miles west of Houston, an area hammered with 17 inches of rain Thursday. One was killed in Travis County and another died in Kendall County.

Although the rain stopped Friday night, the area remains choked with floodwaters.

In some areas last week, rushing floodwaters quickly enveloped people in their homes and left drivers trapped in their cars. Rescue boats had to pluck people stranded waist-deep in water over the weekend.

The National Weather Service has issued several warnings for Texas, telling people not to drive cars through flooded areas and to be careful near riverbanks.

And there may be more rain on the way.

The next big storm system is expected to hit east Texas on Thursday and Friday. It could raise river levels and cause more flooding in the area, already saturated with heavy rains.

"Once you get so much rainfall on land, the next rain isn't going to soak in," said CNN meteorologist and severe weather expert Chad Myers.

The city of Brenham, Texas, set a record for its wettest calendar year on record. It was inundated with more than 19 inches of rain in 48 hours -- more than Los Angeles usually gets in a year, according to CNN Meteorologist Derek Van Dam.

The death toll in the flooding

The body of Darren Charles Mitchell, 21, a National Guardsman from Navasota, Texas, was found Sunday morning in Kuykendall Creek.

Three other people also died in the rushing floodwaters. Lela Holland, 64, drowned when floodwaters overtook her Washington home, according to the Washington County Sheriff's Office.

Jimmy Wayne Schaeffer, 49, of Brenham, drove his pickup truck into high waters, climbed into the truck's bed and was then swept away, officials said.

And Pyarali Rajebhi Umatiya, 59, was found dead Saturday in Yegua Creek, officials said. He was last seen Friday morning in his car, which had stalled in high water.

In Travis County, a body was located near a retention pond, the country emergency management office said. The man had no identification and authorities were working to identify him. The incident took place in the southeastern region of the state.

In Kendall County, Florida Molima, 23, died in a car that was inundated by floodwaters. Her husband, a cousin and another passenger survived. The incident took place in the town of Comfort.

In Bandera County near San Antonio, some areas have received up to 10 inches of rain, according to the National Weather Service. High water rescues there are ongoing.

Evacuation orders have been issued for residents along the Brazos River in Fort Bend County near Houston, starting Sunday afternoon.

Approximately 2,600 inmates from two prisons along the river were being evacuated and sent to other prisons that have bed space, the Texas Department of Criminal Justice said Sunday.

"The offenders are being transported by TDCJ buses, and are accompanied by correctional officers and other staff members who have reported to work to assist in the evacuations," the state prison agency said.

The river is expected to crest on Tuesday morning, officials said.

"From Sunday afternoon on, we'll be in new territory," Fort Bend County Judge Robert Hebert said during an emergency operations conference call. "We just don't know how high it will go."

In Texas, officials were searching for a 10-year-old boy in Parker County, local authorities said.

The boy slipped and fell into the Brazos River, which had become quite swollen from recent rains, said Joel Kertok, spokesman for Parker County Emergency Management.

The search underway in Weatherford, west of Fort Worth, is about 200 miles north of Montgomery County, where the flooding deaths occurred.

The boy had been "fishing with some friends along the Brazos River and he slipped and fell in. The river is up from recent rains and moving fast," Kertok said.

Shawn Brogan was one of the people involved in the search just minutes after the boy fell into the river.

"I was fighting back a giant lump in my throat and tears," he told CNN. "I have two little girls 10 and 7 and couldn't imagine the pain if it were one of them."

At least one person is missing in Travis County and the search will resume on Tuesday.

Another search in Kansas is ongoing for an 11-year-old who was swept away by rushing waters on Friday, according to the Wichita Fire Department.

The Coast Guard said the water current and flood levels coming from the San Jacinto River on Sunday prompted a closing of the Houston Ship Channel after 12 barges broke free.

There had been traffic closures for several hours but authorities gradually lifted restrictions.

The Coast Guard closed a section of the Neches River on Saturday, after a pipeline released an estimated 880 gallons of Eagle Ford crude oil.

Crews secured the source of the leak but they were working to clean up the spill.

"Basically, it's a 1-in-500 chance of it happening in any year," said CNN Meteorologist Taylor Ward. "Happening twice in a single year is very bad luck."

The Houston area experienced its wettest April on record last month, with almost 14 inches of rain. The storm killed at least eight people in Texas and flooded 1,000 homes. The previous record was almost 11 inches in April 1976.

Deadly storms in May 2015 killed at least 22 people in Texas.