Six victims of Internet Casanova share their stories with 20/20 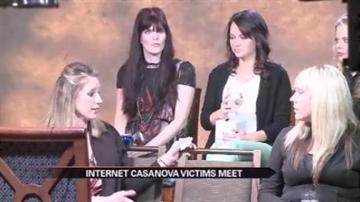 CHICAGO -- Six women who claim to be victims of the Internet Casanova are in Chicago to talk to ABC News about their experiences with the alleged con man. Ray Holycross, 29, of Plymouth, Indiana faces theft charges.

"We got here about 8 o'clock this morning and we had a bare room that you have to turn into a set,” said Tom Berman, ABC producer.

While the mad rush started at the Westin in Chicago by the ABC 20/20 crew, six women from across the country were being flown in or driven in.

They all have had similar experiences with a man whose real name is Raymond Holycross.

"I think will be calling this the Internet Casanova because that's what it is,” said Berman.

All of the women met Holycross online, except for Theresa Bridegroom of Mishawaka.

They claim he pretty much lied about everything including his name, then in most cases took off with their belongings and sold them to get cash to travel to his next location. Then he would move on to romancing the next unsuspecting victim.

“None of us are stupid, he's just really that good. I think it's a story that will resonate with a lot of women,” said Corrine Garrison of St. Joseph, Michigan.

On Wednesday they were all brought together by ABC News to tell their story that will be aired to a national audience.

"I'm the one that's kind of overseeing the production element here and writing it in New York and doing the editing in New York,” said Berman who has 20 years of television experience- 15 of those years have been at the network level with ABC in New York.

The man who claimed he was in TV news, but really wasn’t – is now making the news.

"I think that it's funny because Ray, his big thing was media and wanting to be on TV and I'm just like you know what we’re on TV. And I think it's just a good slap in the face to him,” said Lindsay Wallsmith of Howard County, Indiana.

Wallsmith claims Holycross stole her handgun, iPad and iPod after their first and last date that lasted three days because he claimed his ride never came to pick him up from her home near Kokomo. She filed a police report after discovering his real identity. That outstanding warrant is what police picked him up on in Mishawaka last month.

Holycross is currently in the St. Joseph County Jail held on one count of class D felony theft. Mishawaka Police have charged him with stealing his girlfriend's expensive camera and pawning it in Plymouth.