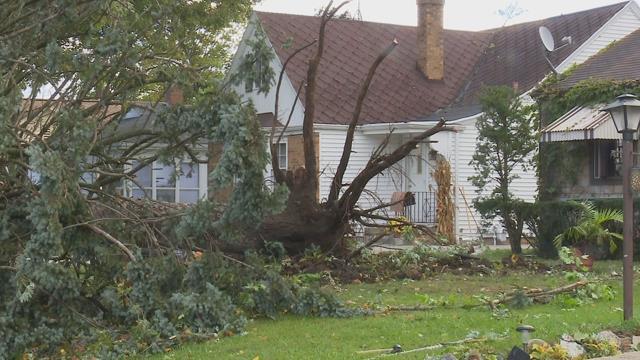 A weak tornado touched down in South Bend Wednesday.

It as only classified as an EF zero, but caused some serious damage to the Sunnymeade neighborhood, and the lot of the old Newman Center.

“It appears that we had a brief tornado touchdown,” Jeff Logston, a science and operations manager with the National Weather Service of Northwest Indiana said.

The tornado was so brief, Sunnyside Avenue homeowner Emily Sandock says there was hardly time to react.

“By the time I thought to try to make it to the basement, we stood up and the earth seemed still,” Sandock said.

The tornado also sirens didn’t go off because no one knew the tornado was happening, including the National Weather Service.

“The sirens do not have individual detection devices on them. The sirens have to be manually deployed,” John Antonucci, director of the St. Joseph County Emergency Management Agency said.

While it was fast and small-scale, the tornado was still destructive.

Sandock’s home was covered in branches, and her van crushed by a tree.

“We could see things like flying past the window, the branches hitting the ground, and the house was shaken,” Sandock said.

Although downed trees caused the most destruction in the Sunnymeade neighborhood, they were also the only clue to tell the National Weather Service there was a tornado there.

“There’s a convergent pattern in the tree damage. If it was all straight line winds, the trees would all be laying in the same direction,” Logston said.

Thursday, neighbors were lifting trees from cars and roofs, helping one another, in long cleanup process caused by a very short tornado.

None of them were physically harmed by the storm.

“All the neighbors really came together and everybody was outside together last night and it’s a really good feeling to know that we all look out for each other,” Sandock said.