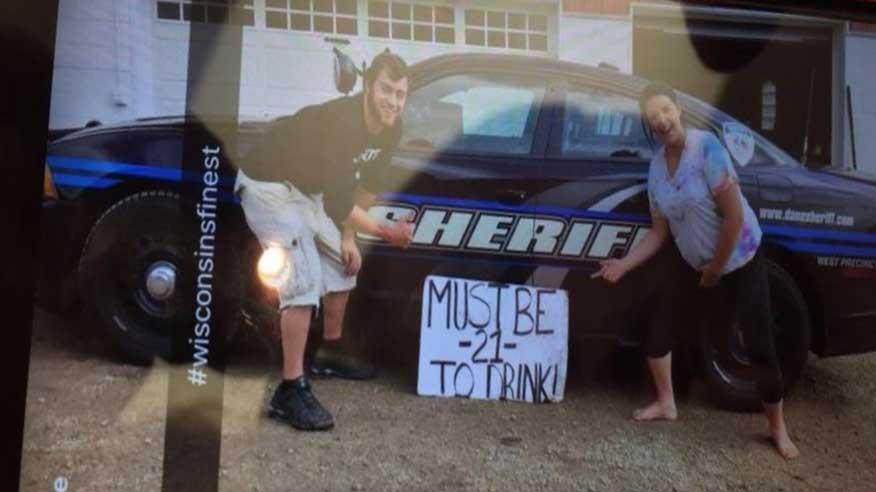 DANE COUNTY, Wis. (CBS58) -- The Dane County Sheriff’s Office released a social media photo that was taken while officers were investigating a 20-year-old woman being thrown from the bed of a pick-up truck and suffering severe head injury.

“While deputies are investigating an incident that has left a 20-year-old Mt. Horeb woman fighting for her life, some of her fellow party-goers are making light of the situation on social media,” said Dane County Sheriff’s Office in a release.

The picture was taken from inside the house at 3111 Hollfelder Road in the town of Springdale, while deputies were investigating the July 24th incident where a woman was thrown from the bed of a pick-up truck and left in the roadway with severe head injuries.

It is estimated there were well over 100 people in attendance at the underage drinking party.

Police said most of the attendees fled or stayed in the house and have not cooperated with law enforcement.

The photo shows William Fish and Addison Moyer, both age 22, posing with a “must be 21 to drink” sign in front of a Dane County squad car.

“The potential for serious injury and even deadly consequences is precisely the reason we take the underage drinking laws seriously in Dane County. All too often, underage drinking parties lead to fatal traffic crashes when an intoxicated person decides to get behind the wheel. The fact that young people in attendance would make light of the incident while their friend fights for her life, highlights why Wisconsin’s culture of drinking must be addressed,” said Sheriff Mahoney.

The woman from Mt. Horeb remains in UW Hospital with life-threatening injuries.