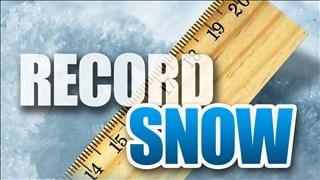 SOUTH BEND, IN -  It was another February morning with slick and snow covered roadways as another system brought a light dusting of snow overnight.  However, even though we only saw up to 2" overnight (a much smaller amount compared to some of the other systems and lake effect events that packed a punch with snowfall totals closer to a foot earlier this month), this system was a record-breaker.

According to the National Weather Service for Northern Indiana, with the added 1"- 2 " of snowfall that blanketed the roadways this morning, it brought the monthly snowfall total for South Bend to 35.7", breaking the previous record of 35.5" in 1908.  Since our first snowfall on Halloween of 2014, our snowfall total through February 26th is 76.8", which is well above the normal of 57.3".

Even though the rest of this month appears to be snow-free, we are tracking another system bringing snow just in time for the first day of March, so do not pack away those snow shovels just yet! Stick with ABC57 News as we get closer to this weekend with your daily updates here.