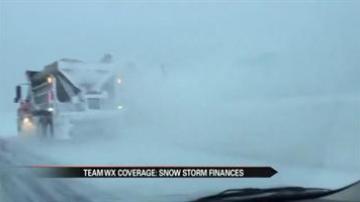 BERRIEN COUNTY, Ind. -- With another heavy round of snow on the way for Berrien County, officials are worried about more than road safety but also their finances.

“The big issue that we have in Berrien County is the lake effect snow.  It could miss us entirely or hit us really hard,” said Berrien County Road Commission Managing Director Louis Csokasy.

Csokasy is praying that the wind pushes the lake effect snow just past Berrien County.

He says the road commissions’ finances depend on it.

The huge storm that hit Berrien County last week cost the county a half a million dollars.

Csokasy is so concerned, he has been meeting with all 22 townships to collaborate.

“We talk about what roads should be done and where the funding is coming from,” said Csokasy.

By state law, only the road commission is allowed to handle maintenance on the roads. including snow removal.

However Csokasy did say that come spring, he may need the townships to chip in because all this snow could be cutting into the summer budget and he says some townships have already been doing their part.

“We have some townships that do extensive work.  Watervliet Township easily spends a quarter of a million dollars a year on their own road system,” said Csokasy.

Csokasy says he has all fifty plow drivers ready to start at four a.m.

But he says the majority of the work will be done on state highways, so be careful on those county roads because there still may be snow and ice on them.