Some residents blaming homeowner for explosion 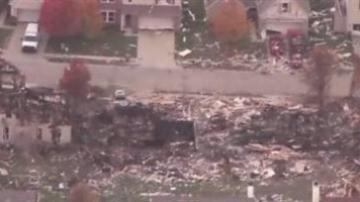 INDIANAPOLIS -- The home explosion that leveled part of a block and killed two people has some people blaming the homeowner.

But the homeowner said she is also a victim in the deadly explosion.

Shirley left for the weekend with her boyfriend and her daughter stayed with friends.

Shirley's ex-husband said their daughter sent him texts saying that the furnace in the house was not working, so they had been staying at a hotel.

A move that some people are now questioning.

But Shirley denies any wrong doing.

"These people lost their life. I lost my house. Everybody lost their house," Shirley said. "It's devastating and people keep asking me questions and questions like I know something. I don't know nothing. I just left my house like I always do."

Investigators remain uncertain about what caused the explosion.