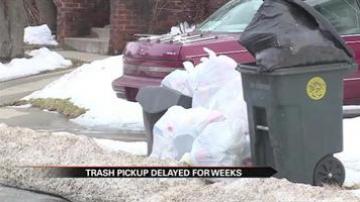 SOUTH BEND, Ind. -- Many South Bend residents say they are still waiting for their trash to be picked up. The weather delayed trash pickup schedules and now the city is working hard to get everyone back on schedule by the end of this week.

South Bend resident Eric Nuccio says his trash has been sitting on the curb for at least two and a half weeks.

"Baby diapers, stuff from the kids, snacks, foods, dinners, breakfasts, a bunch of things. You name it, it's probably in there," said Nuccio.

Nuccio has lived on the corner of Fellows and Irvington in South Bend for almost a year.

He's had trouble getting his trash picked up before, but he says the recent heavy snow has made things almost unbearable.

"They said they were going to have an extra day before garbage pickup but nobody came by or anything so it's just been sitting," said Nuccio.

"They try to say if it's not in the bin it's not getting picked up and I've asked for extra garbage cans because I have a big family, they haven't done anything, nothing for me," said Nuccio.

Nuccio says he's tired of getting in fights with his sanitation workers each and every week, so we tried calling 311 to get an answer.

The 311 operator didn't know and transferred the cal to the voice mail of another 311 representative.

We finally did hear back from a city official who says they will work to solve Nuccio's trash problem.

They said most of South Bend is on track with trash pickup schedules except for a few areas with alley pickups. They're working as fast as they can to get to those customers.