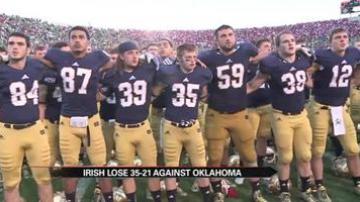 NOTRE DAME, Ind.-- The Fighting Irish suffered their second loss of the season to the Oklahoma Sooners Saturday night.

Oklahoma jumped to a 14-point lead and never trailed en route to a 35-21 victory at Notre Dame Stadium.

The Irish battled hard after Oklahoma caught momentum early on.

Wide receiver TJ Jones caught a six-yard pass from Tommy Rees for the first touchdown of the game, but it wasn't a fast enough start for the offense.

OU put another touchdown on the board in the second quarter, and the Irish weren't able to strike back until the third quarter with George Atkinson III's 80-yard run into the end zone.

“Yeah, we had some good run looks that we could take advantage of. Up front we did a great job blocking them out.  Obviously, the running game was pretty good," Irish quarterback Tommy Rees said.

The Sooners were able to tally two field goals and another touchdown to finish out the second half for the win. Notre Dame put up a good fight until the end with a 30-yard pass from Rees to tight end Troy Niklas, but it wasn't enough to snag the win.

“We just have to take advantage of certain situations. I thought we ran the ball better, which is good, but in key situations we have to make plays,” Irish offensive lineman Zack Martin said.

The Irish say there wasn't any one thing that led to Saturday's loss. They say they are looking to improve on every aspect of their game.

“Just continue to grow in every aspect of the game. There isn’t any one particular thing we need to work on, just everything,” Irish running back George Atkinson III said.

“You just have to make the most out of what you’ve got. We can’t do anything about our past record or previous record. We just have to go out and get better each week and try to win the rest of our games,” Irish cornerback Bennett Jackson said.

The Irish are now 3-2 on the season after suffering their first loss at home since 2011.