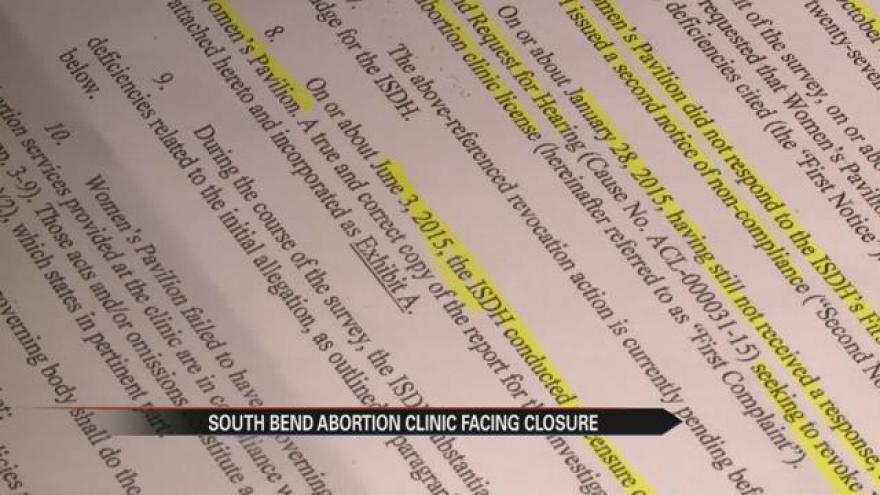 A local abortion clinic could lose its operating license because the state found it did not follow Indiana law when performing abortion services.

The clinic is run by Dr. Ulrich Klopfer, whose medical license is under review by the Medical Licensing Board.

The Indiana Department of Health conducted a survey of the Women's Pavilion in South Bend in October 2014. During that review, the clinic was cited for 27 deficiencies.

The Women's Pavilion never responded with a plan of correction, so in January 2015, the Indiana Department of Health filed a complaint and request for hearing to revoke the abortion clinic license.

On June 3, 2015, the ISDH conducted a licensure complaint investigation and substantiated the complaints and cited deficiencies.

The complaint says the clinic does not have a governing body to ensure the medical abortion services are performed in compliance with Indiana law.

The clinic was not following the state law that says the patient must give their voluntary and informed consent 18 hours before the abortion is performed, according to the ISDH complaint.

According to the ISDH complaint, the doctor said patients seeking medical abortions were given the abortion medication during their initial consultation, not 18 hours later, as required by law.

Dr. Klopfer's office in South Bend is one of seven abortion clinics located across Indiana.

We did reach out to Dr. Ulrich Klopfer and the Women's Pavilion for a comment but they have not gotten back to us.

But the organization that brought these violations to the state's attention is right next door.

We talked to the Executive Director Jeanette Burdell.

"Regardless of what side of the issue you are on for the sake of women's health and safety when they go for this procedure it needs to be a clean safe place and it just falls far below our medical standards here in Saint Joe County," said Burdell.