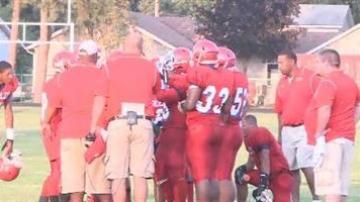 SOUTH BEND, Ind. - South Bend Adams won their first four football games of the season but on Monday afternoon school officials announced the Eagles will have to forfeit two wins because they used an ineligible player.

Adams High School Head Coach Craig Redman announced the details to the team right after school on Monday before practice. He spoke to ABC 57 News shortly after on their practice field. Redman said, "It's a paperwork issue and that's pretty much what it is."

The athletic staff at South Bend Saint Joe brought the issue to light when the head football coach found out Reilly Neuklis was playing for Adams this year. Neuklis played the last three seasons for St. Joe and then transferred to Adams in February of 2011.

Adams Athletic Director Bill Groves said they weren't aware that Neuklis transferred for St. Joe in the middle of last year, therefore they didn't file a eligible waiver with the IHSAA so Neuklis could get cleared to play.

A lot of heads were hanging low as players took to the football field for Monday's practice. Redman said as a team they will pull through this.

It is not clear whether Neuklis will be playing this Friday night when the Eagles take on St. Joe at school field or if he will be penalized for playing on the team when he wasn't eligible.

Bobby Cox, commissioner of the IHSAA,  said the IHSAA along with both Adams High School and Saint. Joe High School are continuing conversations regarding the present and future eligibility of Neuklis, based upon reports emanating from both schools and will continue working until a resolution is reached.

Cox also said upon a resolution, appropriate determinations will be handed out.