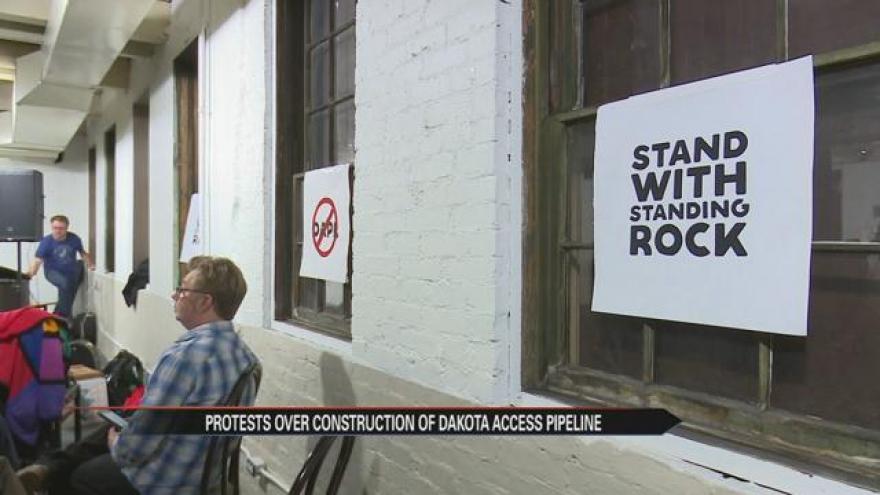 With protests against President Donald Trump’s executive orders happening across the nation, some Michiana artists are ‘Standing with Standing Rock’, speaking out against the Dakota Access Pipeline Sunday.

When asked what her reaction was to President Trump’s decision to continue construction on the pipeline, volunteer Melina Dailey said, “Well, my first instinct is to tell you that my mother would say if I don’t have something nice to say, I shouldn’t say anything at all.”

Instead, some South Bend residents decided to sing and sell art to ‘Stand with Standing Rock.’

“We came here and were continually destroying the native indigenous people’s lands, and this has to stop. We’re all immigrants,” said one of the event organizers, Jennifer Miller.

“I think it’s extremely important for us to recognize that this is 2017, and that oppressing anyone, whether it’s based on ethnicity, religion, any type of background is not okay. We’re done with this,” said Miller’s co-organizer, Dena Woods.

They say they’re ready to speak out.

“Change starts within your own community, so I think that everybody should be getting involved everywhere and not just South Bend,” said Eli Kahn, who came up with the idea for the event.

“This could happen anywhere, and that’s the problem, and that’s what’s scary,” said Miller.

That’s why they’re giving all of the proceeds from LangLab’s benefit concert directly to the Standing Rock Sioux tribe.

“I think people are more invigorated now more than ever to stand up for what they believe in, because this is not really a time to stay apathetic. It’s a time to make your voice heard,” said Kahn.

“I think if enough people stand up and say we won’t stand for this, that gives me a little hope,” said Woods.

Event organizers were still counting the money raised as of Sunday night, but the initial total is over $7,000.