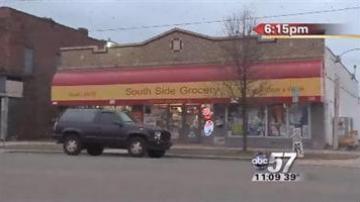 SOUTH BEND, Ind. -- A South Bend convenience store owner is shaken up after he said his store was targeted by a gunman again!

Shots were fired just before 6 p.m. at South Side Grocery on South Michigan Street.

The owner told us a man walked up to him outside the back of his store, and then let off three shots!

The police haven't made any arrests, and that store owner said he feels like his store is being targeted.

On Sunday, a man grabbed money from the register and ran off. According to police and the owner, no weapon was used in that incident.