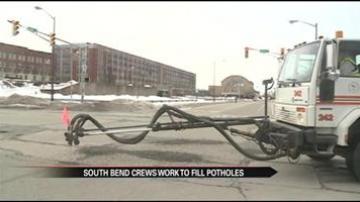 SOUTH BEND, Ind. -- City crews are working overtime to patch up potholes all across South Bend.

Crews don’t usually work on Saturdays, but the city’s street department says they are asking employees to work overtime as more cars get damaged by potholes.

We followed along as a crew repaird potholes on the city's east side.

The crew focused their efforts on patching a cluster of potholes near Mishawaka and Ironwood drives.

It is where drivers say the potholes are driving them crazy.

"I drive this street often. I drive Mishawaka Street often. 23 by the big Martin’s store often. Nothing but potholes. All over the place. Every street has them,” Lee Nicks explained.

Brady August thinks the city has its hands full, but says workers are doing a good job patching them up.

“I’d say they’ve done a pretty good job of repairing potholes. The ones they haven’t gotten to are pretty bad though. And I have seen some cars flatten tires by hitting them," said August.

The city hopes the patch jobs will mean fewer claims from drivers whose vehicles were damaged by potholes.