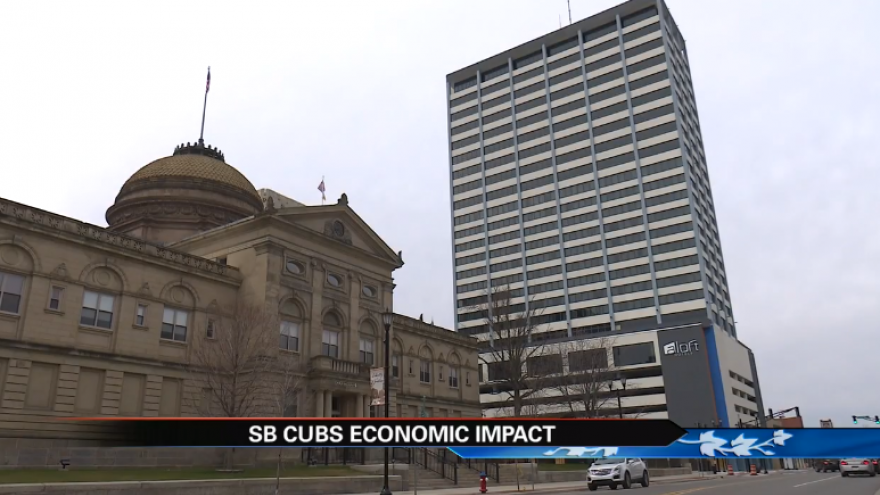 SOUTH BEND, Ind. -- The South Bend Cubs' record attendance hasn't just benefited the franchise, but neighbors too. Right now Downtown South Bend is undergoing a major transformation and many credit the Cubs for helping get it started.

Four Winds Field is not the only place you'll find construction happening. All it takes is a quick drive through downtown and you'll see plenty of crews working on the next new place to live, eat or stay.

"Projects have popped really on every block within downtown," said Executive Director of Downtown South Bend, Inc. (DTSB), Jill Scicchitano. "If you walk around you're going to see something happening."

Scicchitano says, there's no doubt the South Bend Cubs have played a big role in that new development. There have been $115 million dollars in private investments downtown since the team arrived in 2014.

"Investments like that do spur confidence in the marketplace and spur others to want to be a part of what's going on, said Scicchitano.

It's that confidence that made the owners of Blackthorn Golf Club want to take a chance on downtown.

Haag is hoping that will be the case with their new casual cocktail bar Spirited when it opens later this spring in the Jefferson Center -- which just underwent a multi-million dollar facelift.

"It's a casual cocktail concept with fresh food items," said Haag. "It's going to be just a really cool casual place for people to hang out."

Despite all the development you still need more than two hands to count the number of vacant storefronts, but that's changing fast.

According to DTSB, storefront occupancy is at 87% and it's gone up every year since the Cubs came to town.

"Occupancy just in storefronts downtown is the highest it's been in 6 years and we have so many more coming online just in the next year and a half," said Scicchitano. "So You're going to see a lot of new energy. I think we are seeing just the start of it and things are going to continue to progress."

There is one noticeable absence right across the street from Four Winds Field. The old V.A. Clinic on Western Avenue is now sitting vacant, but that won't be the case for long. A division of Cressy Commercial Real Estate bought the building and will convert it into new offices and storage space geared for the growing number of people living downtown.

"You're going to see whatever comes available is not going to be available for very long," said Scicchitano. "There's some announcements coming online this year that are really going to transform some of these blocks downtown."

"We used to joke that you can shoot a rocket through the middle of downtown after 5:00 and you wouldn't hit anything, but now that isn't the case," said Haag.

They hope it will never be the case again.

You'll also notice work has finally begun on another huge investment near the ballpark. Crews have started on the $168-million makeover for the exterior of the old Studebaker plant. The 220,000 square foot space will eventually become a technology and innovation complex with an all glass facade.