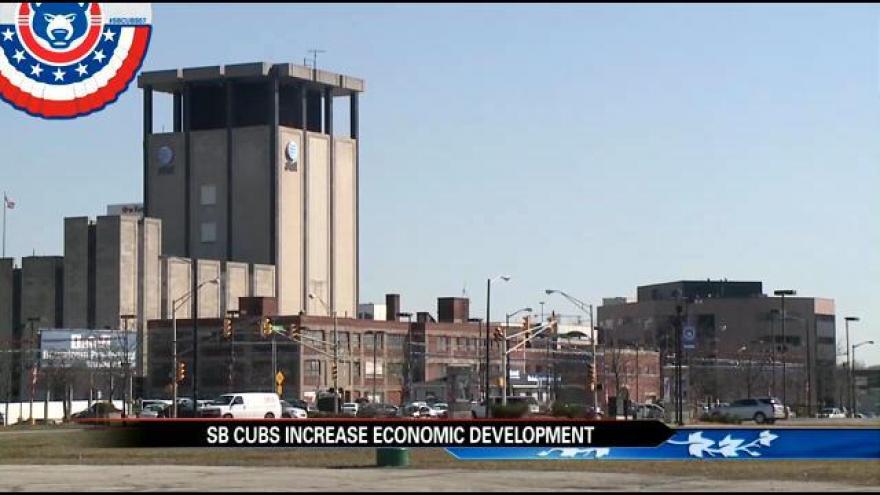 Developers are eyeing the area surrounding Four Winds Field now that the South Bend's minor league team is associated with the Chicago Cubs.

Jeff Rea the CEO of the St. Joseph County Chamber of Commerce said it's hard to put a dollar amount on how much money this new affiliation will bring to the county.

Rea said he's optimistic and could see the area by Four Winds Field turning into a mini Wrigleyville like in Chicago.

Rea said, “I think they want it to have that vibe but I think you need to have population first so you need rooftops and you need people living in and around there much like you have in that Wrigley area!”

With a little branding and a regional team to stand behind, Rea said developers are showing interest in popping up shop in South Bend.

Rea said, “There's a tremendous amount of interest for developing in and around the cove, thirty years ago when they built the park, the idea was this is going to be a catalyst for some development happening and it was going to help extend downtown a little bit to the south and over those thirty years that never really happened.”

Rea said it's important for the South Bend Cubs to have success first. In 2014, the Silver Hawks had record attendance so Rea said they are taking steps in the right direction.

Rea said, “I think initially it will draw from the region and the nine counties that really surround South Bend and that area and I also think you'll see some true baseball fans do want to come down this way to see those hot prospects. Cub fans are very loyal they follow their team from the time they're prospects to the time they make their debut at Wrigley Field!”

Rea mentioned Tin Cap stadium in Fort Wayne as a good example of how the city is connected to the baseball stadium.

Rea said, “I think things like the continued growth there at Union Station, the Ivy Tower renovated, I think you'll see some housing and other options in that outfield area and some of those vacant parcels around it, I think the desire has been for a long time to connect downtown with the park!”
Share this article: