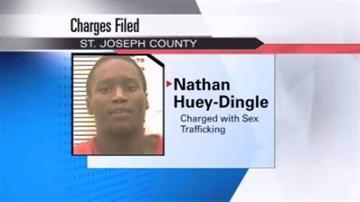 SOUTH BEND — A South Bend man accused of sex trafficking is behind bars.

Nathan Huey-Dingle, 31, faces several charges including sex trafficking by force, fraud and coercion and transporting across state lines for prostitution.

He was previously charged in the 2013 murder of a South Bend woman, 22-year-old Rachael Woods.

Woods was found inside a car along Interstate 65.

She later died at an Indianapolis hospital.