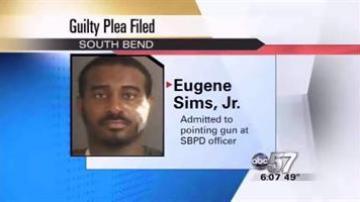 SOUTH BEND, Ind. -- A man accused of pointing an assault rifle at South Bend police is now waiting to learn his fate!

Eugene Sims, Jr. pleaded guilty to felony charges for pointing a gun at officers during a confrontation in late December.

He was shot in the arm by an officer.

Sims is scheduled to be sentenced early next month.