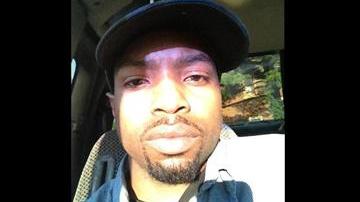 "About 11:30 p.m. at night I heard a loud noise and I called 911," said Betty Glassman, who lives in the area where the shooting victim was discovered.

When Glassman looked outside she saw a black Mustang that had crashed through her neighbors fence. Police say the man behind the wheel, 29-year-old Dominique Jackson was bleeding profusely.

"I did see an officer take a towel and put it on the young man's neck in the car so I knew he had been shot in the neck," said Glassman. "I still stayed out here and I watch them take the young man out of the car and load him in the ambulance."

"When I saw that blood splatter I thought 'Oh my gosh it must be bad,'" said neighbor Ray Minix.

"We saw bullet markers and blood markers on the ground," said another neighbor, Eric Davis.

Eric Davis and his wife Amanda Jean Sommers-Davis took pictures before police told them to stop.

"They told us no more pictures because it was an active crime scene," said Eric.

Investigators with MHU told ABC 57 News that a shooting that occurred right around the same time at Greg's Wet Wash is connected to the incident on Huey street. The car wash is located at 1804 Lincolnway West.

A man who just signed a lease recently at Greg's Wet Wash told ABC 57 News that one of the bullets went straight through a window on the east side of the building narrowly missing his head as he walked by that window on Saturday night.

He claims they were renting the Car Wash out to a South Bend man who told them he was leasing the car wash Saturday night from 10 p.m. to 2 a.m. hosting a birthday party.

One of the men who rents out the car wash said he came out to the building around 11:30 p.m. Saturday night just to make sure everything was okay and their was adaquate security present.

When he got there, he said one of the water pipes busted inside, so they cleared everyone out into the parking lot and they squeegeed the water out the door.

The next thing he knew, bullets were flying.

Tim Corbett the MHU Commander told ABC 57 News one of the women is in critical condition.

"It's ridiculous the way the streets are these days you know people killing people and it doesn't make any sense at all," said Glassman.

"It scares me for these kids," said Minix.

MHU investigators are not saying if Jackson was shot while driving his car on Huey Street or if he may have been at the car wash when he was shot, which is located about a mile down the street.

No arrests have been made at this time in connection with these cases.