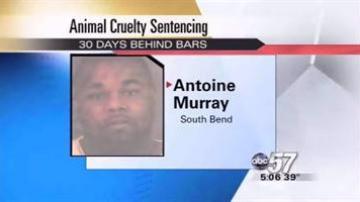 SOUTH BEND, Ind. -- A South Bend man will spend only 30 days behind bars after pleading guilty to three counts of animal cruelty.

Antoine Murray was sentenced Tuesday. A year ago he left four dogs alone in his home on Westmore Street.

The decomposing carcasses of two dogs were found. The other two were severely malnourished. Officials say they were feeding on the carcasses and had to be put down.

Murray will be on probation for just under a year.