SOUTH BEND, Ind.—John D’Hoore and his family took the day off from work on Monday to spend the day at The History Museum.

But it wasn’t other people’s treasures that D’Hoore and his loved ones were making the trip to see.

It was their own.

About twenty-five years ago, when D’Hoore was about two and a half years old, his mother Sandy Smith decided that due to the dangerous nature of her career, she wanted to create a collection of mementos for her children to receive when they grew up.

“I put the stuff, the letters, in the time capsule just in case I wasn’t around anymore,” Smith said. “He was young. I thought it’d be neat for him to see when he was twenty-something.”

Starting in 1994, the Junior League of South Bend enlisted the help of local children to collect items to place into a time capsule to be opened in 2020. The time capsule was sealed in 1996.

On January 20, 2020, D’Hoore was in the audience as his small Thomas the Train engine, a photo of him on his beloved fire truck, and letters from his parents were retrieved. 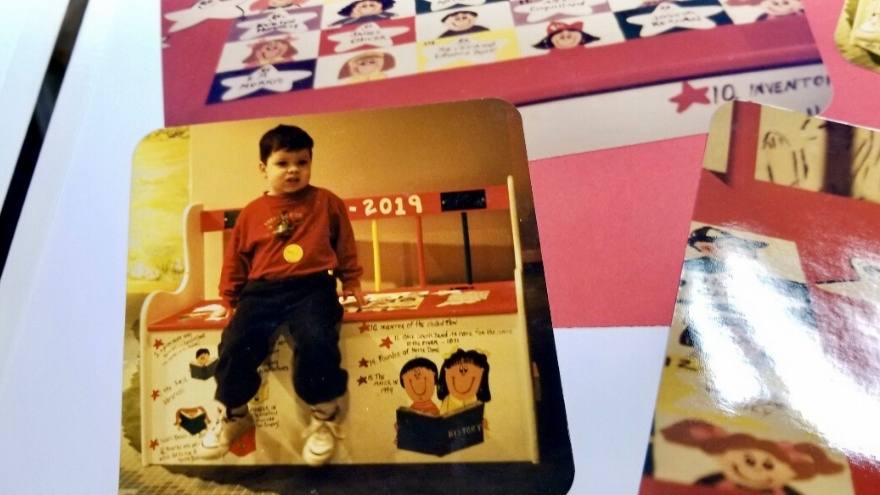 “A lot has changed in everybody’s lives,” D’Hoore said. “I was almost crying. It was very neat to see. Neither of my parents’ handwriting has changed at all.”

In their letter, D’Hoore’s parents wrote about his likes as a toddler and their hopes that their young son would someday be successful and on his way to leading a good life.

“I just think that people get lost in all of the current technology. I think it’s important to remember where we came from,” D’Hoore said. “It’s not a bad thing to write your family a letter, it doesn’t matter if they live across town or across the world but take time to live in the past for a little bit, it’s not always a bad thing.”

If he could place items in a time capsule today, D’Hoore said that he would probably choose items from his time in the military and a letter to his future self.

D’Hoore’s mementos were among about 1,000 items pulled from the time capsule on Monday before an audience at The History Museum.

Videos, letters, photos and artifacts of local schoolchildren’s lives during the 1990's overflowed on the museum’s tables, as visitors reminisced about their own childhoods.

“In one of the time capsules, a child predicted that in the future there would be electric cars and fast trains so I think they were right on target,” said Director of Marketing for The History Museum Marilyn Thompson.

Items from the time capsule include:

“A time capsule is a wonderful way to not only preserve a bit of history but to show what was important at the time,” Thompson said.

The time capsule items will remain on display at the History Museum for the community to go see.