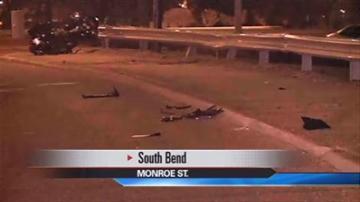 SOUTH BEND — Around midnight Saturday night, a man on a motorcycle lost control and flipped his bike.

ABC 57 was the only news crew on the scene.

Police say the man was going too fast and hit the guard rail.

As he flipped the bike, they say he hit his head on the sidewalk.

He was not wearing a helmet.

Police say he was taken to Memorial Hospital and is stable.