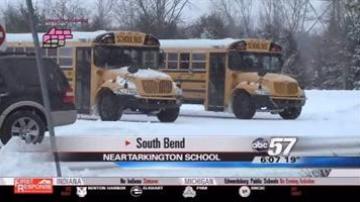 SOUTH BEND, IND. -- Elkhart, Mishawaka, P.H.M. and Niles schools all closed because of the snow and cold temperatures, but the South Bend Community School District kept it's doors open.

"All the other kids didn't have to go to school today", saidTarkington school parent Kara Newman.

Kara Newman was upset because her kids didn't get a snow day, so she kept them home anyway.

"If cars are sliding around like that I can't trust that one adult. I can keep track of all of those kids and that drive that big honking bus down the street and do it in a safe manner", said Newman.

Newman was already upset, but then she saw the P.T.O. Facebook page.  One parent said she sent an email complaining about school being open to the school board President Roger Parent.

According to the mother who complained, Roger Parent's email response was even more enraging.

The last line reads, "We will not nurture a strong population by pampering our students and their parents.

"I'm not babying my children by not making them stand outside in freezing cold weather just to get on a bus I'm not even sure will make it there", said Newman.

ABC 57 talked with Roger Parent and asked about the email.  He said that any questions would have to be directed to the superintendent.

Spokesperson for the superintendent, Sue Coney, said she does not know anything about an email, but she did say that South Bend Community School District does not follow the lead of any other school.

Newman thinks the district is worried about spending money on make-up snow days.

"You can't put a price tag on my kid's safety"

Coney said plowing starts in the middle of the night to make sure roads are safe for students.

South Bend's communications director said the district has a 91 percent attendance rating, only down four percent from the day before.