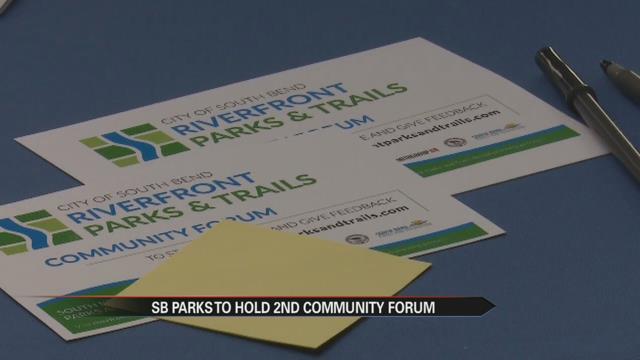 The South Bend Parks Department is hosting their second community forum tonight to discuss the changes to the city’s riverfront parks and trails, and a lot of planning has happened since September.

“We’ve been really asking for community feedback over the past several weeks. Meeting with neighborhood groups, different stakeholders, developers,” said Aaron Perri, the Executive Director of the South Bend Parks and Recreation Department.

The city decided since the parks haven’t been looked at for updating in decades, now was the right time to proceed, but with the community’s input heavily influencing the plans.

They’re updating the parks and trails located between Darden Road and Logan Street. But, they’re heavily focusing on the areas between South Bend Farmer’s Market and Leeper Park.

“We’re hearing all kinds of themes whether it be how to create better access to the river, or how to create safer areas or areas that include more public art, or various recreational activities we can include,” Perri said.

South Bend is investing nearly $10 million for the project. The city hired SmithGroupJJR to head the plan. They’re working with them to find a way to take what the community suggested and make it a reality.

“The idea is that we really have been consolidating those ideas, understanding, prioritizing them and start to understand how they might manifest themselves in the riverfront parks plan,” Perri said.

Tonight’s meeting is to make sure residents are kept in the loop. The department will summarize the feedback by the community, give the public another chance to give input and to make sure they’re on the right track.

“This is kind of our last forum before the design’s start to shape up so after this particular meeting, we’ll again synthesize the feedback then we’ll start meeting with smaller groups remaining of this year,” said Perri.

The forum begins at 5:30 P.M. Wednesday at Century Center in Recital Hall. Parking will be available, free of charge in the Century Center parking lot.