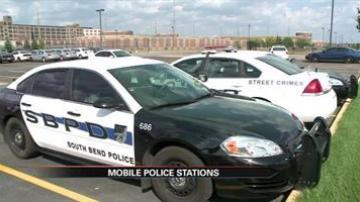 SOUTH BEND, Ind. -- South Bend Police Officers are now driving what they call mobile police stations. Their patrol cars are equipped with the latest technology so officers don't have to go to the station, they can start their day in their car - and spend more time on the street.

When South Bend officers start their shifts, they have everything they need.

"You can pretty much transact all your business as a street police officer from your vehicle," said Captain Phil Trent of the South Bend Police Department.

Today's police cruiser is a far cry from those used 30 years ago.

"When I came on we didn't even have take home shotguns, we did not have take home radios, all this stuff came a few years after I got here, And I'm going to tell you, it makes the job so much easier," said Sergeant Charles Stokes of the South Bend Police Department.

Everything is high tech from the cameras to the computers.

"If you have a prisoner in back or if you are doing a statement, you can just pop your camera around, and then talk to the person, the back mic picks it up," said Stokes.

Even the radios have been upgraded.

But fighting crime is only one aspect of an officer's job and the car is equipped with everything an officer needs for other emergencies.

"I have everything that we need for a river rescue in this bag, there is a flotation device, there is a vest, and there's a rope if I have to throw it to someone to get them out of the water," said Stokes.

Recently the department announced they were close to adding several new cars to the fleet.

With more than 200 cars rotating through, the department buys new cars every year. The equipment inside is constantly evaluated to give them the edge they need on the streets.