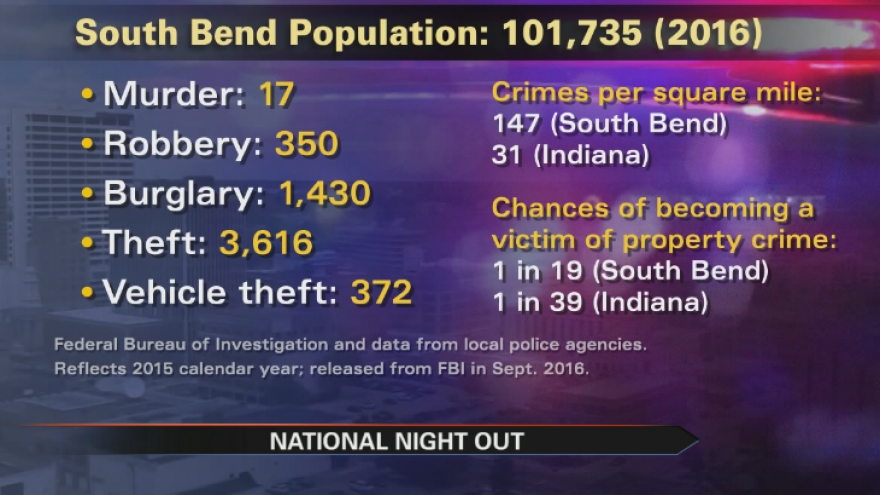 Its ‘National Night Out’ for emergency responders across the country, and they’re using it to talk with you. It’s an event meant for fun and games, but also to address crime and how you can help police stop it.

In recent years, South Bend has been home to some of the highest crime rates in the state, and police are looking to address this issue by inviting the community to come talk to them during a national summer event.

“In the end, it is to end crime in our community so we talk about way to prevent becoming victims of burglaries, to protect your home, your car. But really to also interact with our officers, because at the end of the day, we can give you tips, but until you have a good relationship with your officers, that way we know what’s going on in the community, we’re able to better fight crime,” said Ken Garcia, Spokesman for the South Bend Police Department.

Some of those numbers include data collected by the FBI and local agencies. In 2015, South Bend saw more than 17 murders, 350 robberies, 1,430 burglaries, more than 3,600 thefts, and 372 vehicle thefts. The FBI calculated just how many crimes happen per square mile, which came out to be 147 in South Bend, and 31 in Indiana. If you live in South Bend, your chances of becoming a victim to property crime are 1 in 19.

More recent numbers show that there have been 10 homicides thus far in 2017 (all of which appear to result from shootings), 141 robberies, and more than 1,300 incidents of theft this year.

“Obviously we do have shootings in our community; a lot of shootings tend to happen. When it comes to fighting crime and ending crime in our community, it is a community effort. So really, it is to build that relationship, build that trust between the police and the community so that if something does happen, they’re wanting to call, they want to help, they want to be involved because nobody wants to live in a crime area,” said Garcia.

During the event, police and other agencies are looking to talk with the community about ways they can work together to change these numbers. There, you’ll find more than 25 different agencies including police, fire, SWAT, and their bomb squad units. You will also have the chance to see police dogs and demonstrations of how police catch criminals. Refreshments will be served along with entertainment and games. You can also find more information on details and sponsors for this event by clicking here.

National Night Out will begin at 5:00 p.m. Tuesday and run until 7:30 p.m. at the South Bend Police Department’s east side parking lot. It’s free and open to the public.