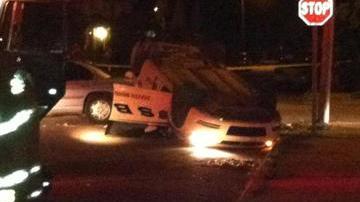 The crash happened at Huron and Brookfield Streets on the city's west side.

Officers told ABC 57 News on the scene that the officer was north on Brookfield at the time of the accident when he hit another car.

ABC 57 News has exclusively learned through sources that the officer involved in the crash was Corporal Jeff MacPhee.

MacPhee was taken to Memorial Hospital by ambulance for observation, officers on the scene said that it didn't appear that he suffered any injuries.

Officers declined to officially release the officer's name on the scene of the crash.

MacPee's squad car was overturned on its top during the crash. He had to be extricated from the vehicle.

The two females in the car that was hit declined medical treatment at the time. We're told the driver of the car was 18-years-old.

Huron and Brookfield were blocked off in all directions for several hours during the investigation.

It's possible that MacPhee was on his way to a call at the time of the accident, it wasn't immediately available if he had his lights and siren on at the time.

Stay with ABC 57 News for details on this developing story.