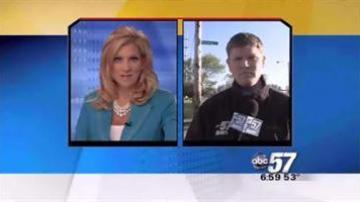 SOUTH BEND, Ind. -- We are following breaking news out of South Bend.

Just before 4 p.m., South Bend police announced to be on the lookout for a phony officer.

Police said a person was pulled over near Main Street and Farneman Avenue by a man in a Taurus posing as an officer.

The suspect was described as a white man in his 30s, 5'10", approximately 240-260 lbs., with red hair and a goatee. He was wearing camouflage pants and a shirt with a tee-shirt shirt under it that said "POLICE" on the front of it. He was armed with a handgun in a holster, but did not have a badge or radio.

The fake cop took off, but so far, officers have not been able to find him.

We will have more information coming up on ABC57 News at 6 p.m.