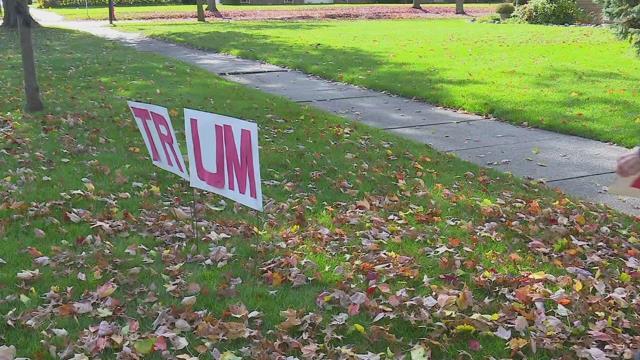 In Michiana the day after Election Day 2016  is full of emotions.

“I feel like a lot of people in the LGBTQ community I am devastated," says Eli Williams, Executive Director of The LGBTQ Center.

Leaders of minority groups aren't joyful today, but it’s not all negative.

“I did something I had never done before, I had tears of joy,” says Christine Murdock of South Bend.

Murdock moves her Trump support signs closer to the street so everyone can see she is proud to call Donald Trump the next president.

“He is going to get the right people in the Supreme Court, I think he is going to do what he said he was going to do and I think it will be good for the future of our county,” says Murdock.

For some in Michiana the promises made during Donald Trump’s campaign don’t bring hope but fear, instead.

“We know the redirect was very negative but we don’t know what that will mean in terms of policy,” says Centellas.

Centellas says it is still too early to know what the next moves are but some local immigrants are worried about Trump’s promises of deportation.

At the LGBTQ center in South Bend the Executive Director says election results show a dark side to this country.

“I think this election has revealed that we are a divided country and even more so than we thought,” says Williams.

Williams says the Trump campaign did not threaten LGBT rights but says the center is going to stand strong with other minority groups here in Michiana.

“I feel right now change has to come from the local level because our national politics have failed us,” says Williams.

But Murdock says give the new president time.

“Give him a chance. I mean just don’t say no right away,” says Murdock.