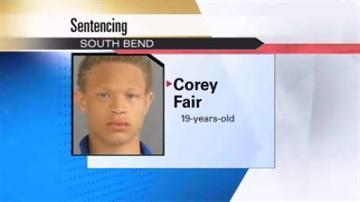 SOUTH BEND, Ind. -- A judge sentenced a South Bend teenager to 18 years in prison after he pleaded guilty to robbery charges.

The judge fined 19-year-old, Corey Fair $1000 in restitution and he will be under court supervision for three years when he gets out of prison.