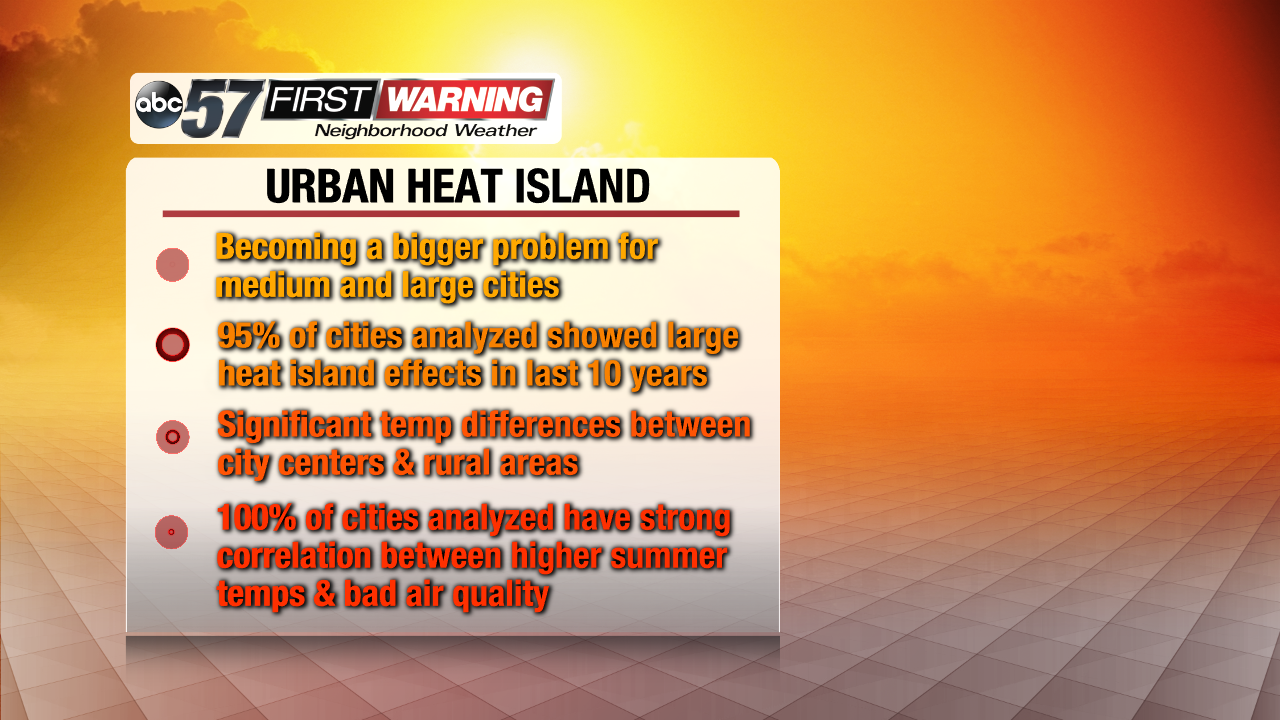 Earth is warming. That can be proven by the temperature of the planet. And, as the planet continues to warm, medium and large cities are suffering the most. That's because the effects of summertime heat are significantly more noticeable within city centers. That includes regional cities like South Bend, Grand Rapids, Fort Wayne, Indianapolis, and Lansing.

This all comes down to the urban heat island effect, which is exactly what it sounds like. Urbanized areas create an "island of heat" that causes them to be much warmer than surrounding areas like suburbs, farmland and other rural locations. A recent research report conducted by Climate Central looked at 60 U.S. cities and the impact of hotter weather. South Bend was not looked at, but similar cities like Grand Rapids were. Grand Rapids and South Bend are similar in surface area and infrastructure. Thus, we looked at Grand Rapids and what the report had to say about the city. 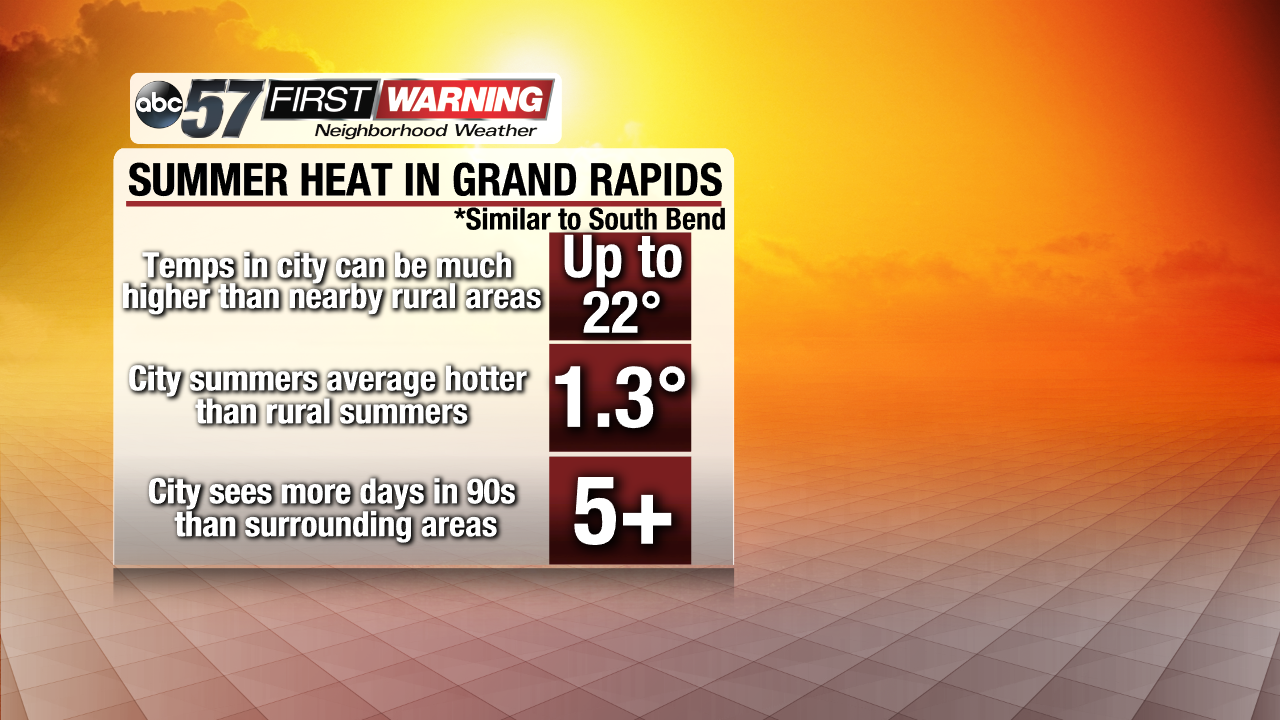 Of the 60 cities analyzed, 95% of them were found to have a large heat island effect, and all of them exhibited a strong correlation between higher summertime temperatures and poor air quality. In Grand Rapids, summertime temperatures can be upwards of 22° hotter than surrounding rural locations! While it is likely less extreme, similar trends can likely be expected in South Bend. The City of Grand Rapids averages temperatures during the summer that are a whopping 1.3° hotter than areas just outside of the city itself. That may not seem like a large number, but when you break it down day by day, it is. In fact, metro Grand Rapids sees at least five more days in the 90s than locations around the city. That trend is likely the case for South Bend. The South Bend-Mishawaka metropolitan area will likely see 4-5 more days above 90° each summer than locations like North Liberty, La Porte, Plymouth, Elkhart, Niles, LaGrange, Rochester, Warsaw, Knox, Winamac, Edwardsburg, and Sturgis, to name a few. 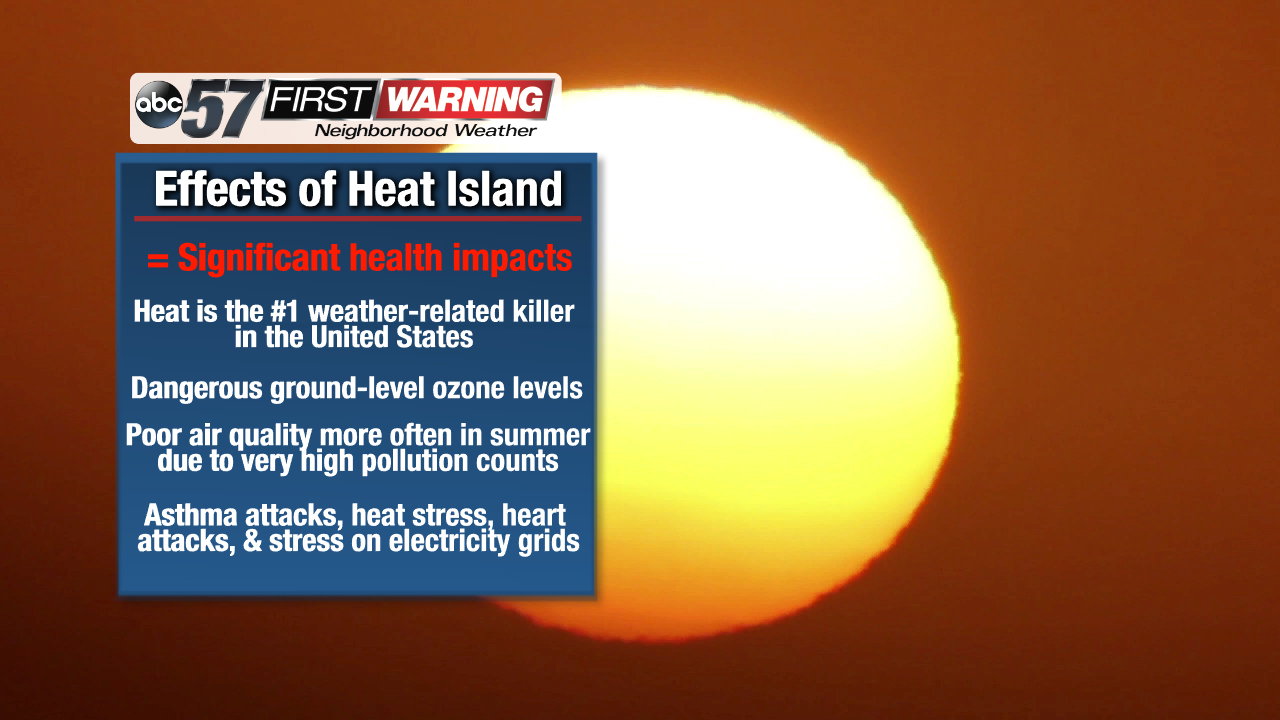 But, what are the impacts of these urban heat islands? And, are they something we should concern ourselves with? Medium and large cities can provide an environment that is much less healthy than suburbs and rural locations. With rising temperatures and enhanced heat within metropolitan areas, ground-level ozone levels become dangerous to some, if not many, people. These ozone levels and high pollution counts can create very poor air quality conditions during the summer.This leads to health impacts, such as difficulty breathing, asthma attacks, heat stress and heat stroke, and heart attacks. And, while daytime temperatures inside city limits are very toasty, there is often little relief at night compared to farmland and rural locations. That further exacerbates the potential health problems associated with summertime heat islands.

As with any type of climate change discussion, humans can help lower the extent to which urban heat islands affect people and the planet. Solar, wind and electric power can go a long way in reducing pollution. Buildings with white roofs, parks and trees and alternative materials for infrastructure can also help. However, greenhouse gas emissions will continue plaguing the planet over the next several decades. This is projected to rise average temperatures even more so. Therefore, urban heat island effects will likely only get worse, and city temperatures will likely only get hotter. The result? A continued uptick in health-related problems for people who reside in or work in cities.