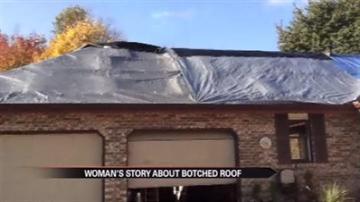 A new roof is often one of the most expensive repairs in a home. It's also one of the first things to be negotiated in a real estate deal. That's why it is crucial to choose a vetted roofer you can trust.

One St. Joseph County woman hopes you can avoid the nightmare she endured. It included significant water damage in her home and thousands of dollars lost.

A retired teacher, she recently lost her life savings while replacing her roof.

"I thought its 30 years, time to get a new roof," she said. "I didn't have any problems with the present one but I was proactive."

It's a decision she says left her broke, with a life lesson and a name she wants to share. The name of her roofer, Charlie Seabolt.

"I felt confident. He was a good Christian and he said satisfaction guaranteed," says Howland.

Seabolt Construction crews began tearing off shingles and replacing boards. Not in small sections, but Howland says they cleared off the entire roof at once. Half of the $5,000 payment seemed worth it. So far.

"I heard the first scraping over the garage and I thought here go, let's get it over with," she says.

But that was just the beginning. Because as they say, when it rains, it pours.

She says those new boards were soaked and buckets full of rainwater came right from the roof onto her floor.

"Most people would have reasoned if it's that wet and you seal it in, it has to go somewhere and it did. It went through the rest of the house for the rest of the year," says Howland.

"With added caution and preparation, it could have been totally avoided," says Jared McQuee from A & M Roofing.

The root of it? They found those now moldy, rotten boards lining Howland's home.

"Just OSB Board, not high dollar so as soon as it gets wet, it just spreads throughout," says McQueen.

So what does Charlie Seabolt think of the roofing job he did for Howland?

"Everything she says is a lie," says Seabolt.

When pressed about the bathroom, Seabolt admits that was true.

But when pressed about the problems in the home, Seabolt says it was because Howland hates men.

"She hates men. She had to buy the house from her husband," he says.

But Howland wants more. The fight is now in court.

He wants the case dropped.

And she wants that promise Seabolt made her nearly a year half ago ago, fulfilled.

"I want him to stick to his word, satisfaction guaranteed," said Howland.