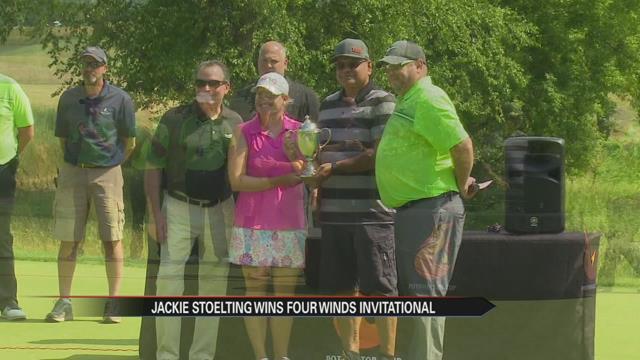 For the fifth year in a row, a champion was made at the Michiana golf tournament.

“I knew I was five back, I think, to start the day, and so I was like, I just have to play aggressive and sometimes that mindset is a lot easier,” tournament winner Jackie Stoelting said.

Stoelting, who’s from Florida, won the tournament Sunday afternoon, capping off a strong weekend of golf in South Bend.

“We are so fortunate to have professional golf in a market of our size,” Blackthorn Golf Club Owner Tim Firestone said.

Firestone said his favorite part of the tournament is helping young, female golfers get their shot at the big leagues.

“For us to play a part in that, it’s pretty cool and pretty neat to see how we can impact a young lady’s life,” Firestone said.

But he also said the tournament has a significant impact locally, having raised more than $200,000 for Memorial Children’s Hospital, and bringing in nearly 200 volunteers to help run the show.

Pam Pawloski of Granger was one of this year’s volunteers.

“I am a golfer; not a very good one,” she said. “But I think that this is a great event for up and coming, hopeful, professional ladies.”

Sunday marked the end of a steamy tournament weekend, but the heat didn’t stop the golfers from taking their time and appreciating a course they say they love.

And for Stoelting, Sunday’s win is not only a victory professionally, but also personally.

“To my husband Travis, he is my swing coach, caddy and this is my fourth win,” Stoelting said while accepting her trophy. “But finally, the first [win] with him on the bag [as caddy], so we finally got the monkey off the back!”

Firestone said the tournament here in South Bend continues to grow year after year, and he’s very hopeful for another successful tournament – the sixth annual – next year.