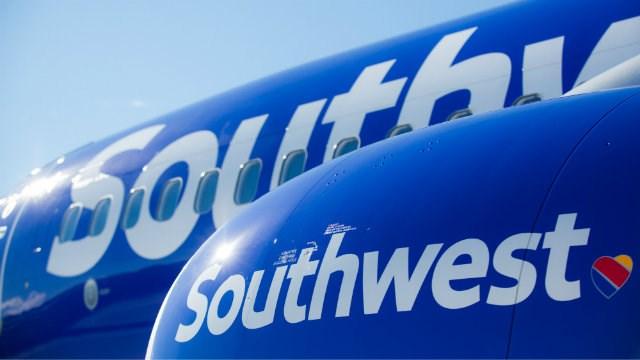 Shares of Southwest Airlines were in a tailspin Wednesday, down more than 7% in midday trading after the airline reported lower-than-expected sales. The reason: declining ticket prices.

The airline said that a key measure of the fares paid by passengers fell by 5% compared to a year earlier. While overall revenue was down only slightly, it fell short of forecasts. And the airline expects to see fares decline by another 4% to 5% in the fourth quarter.

Southwest added that "the overall [fare] environment remains soft," so far for the current quarter. Company executives said they hope to be able to achieve higher fares next year.

Shares of rivals American Airlines, United Continental and were also slightly lower, although Delta Air Lines posted a modest gain. Those airlines have already reported their own airfare declines in the quarter.

Southwest's profits fell 7% to $582 million. In addition to the lower fares, the airline took a $55 million revenue hit from a computer outage that forced it to cancel more than 1,000 flights in July.

The airline's labor costs rose 12% after it paid out $356 million in signing bonuses to unionized employees, including pilots, on their new contracts.